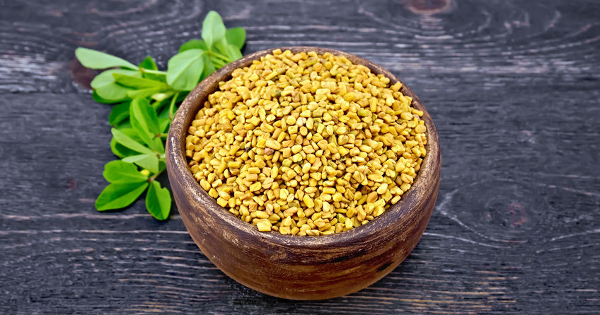 Looking for a way to beef-up athletic performance without adding more protein to your diet? A new study shows that consuming an unassuming spice may be an efficient way to safely boost strength, endurance and even testosterone

Published in June 2020 in the journal Translational Sports Medicine, the randomized, placebo-controlled, double-blind study[i] was led by Amanda J. Rao, based at the University of Sydney, Australia, and funded by Gencor Pacific, a botanical nutraceuticals company.[ii]

The final approved test group consisted of 138 male participants between 25 and 47 years of age who were randomized into three equal groups receiving either 600 milligrams (mg) of Testofen®, 300 mg of Testofen® or placebo.

Baseline measurements were taken of each participant's muscle strength and endurance, functional power threshold, body composition and sex hormones, with follow-up measurements taken at four and eight weeks. Participants agreed to perform a whole-body calisthenics program three times per week for the duration of the study period.

Further analysis showed that additional improvements were observed in the fenugreek groups in a dose-dependent manner, with subjects taking 600 mg of Testofen® displaying more significant results across an array of indicators.

The 600-mg group also demonstrated an increase in testosterone concentration from baseline to the final eight-week measurement. Increased testosterone is generally associated with increases in muscle size and strength.[iii]

Researchers concluded that this study indicates that Testofen® may be an effective aid for individuals wanting to rapidly improve their exercise performance capabilities and body composition above and beyond that of calisthenic exercise alone.[iv] Testofen® is a standardized fenugreek extract that has previously been studied for uses such as male sexual desire and andropause, sometimes described as male menopause.[v]

Fenugreek is an annual plant that has been used for medicinal purposes for thousands of years. Latin name Trigonella foenum-graecum, fenugreek has records of use going back to ancient Egypt and is a staple of Greek, Chinese and Ayurvedic herbal traditions.

In modern times, fenugreek is best known for crossing over from the medicinal apothecary into the kitchen. Seeds from the plant are used in cooking and the fragrant leaves are eaten in some cultures as a green vegetable. Fenugreek's sweet, aromatic flavor profile is likened to maple syrup, which explains its use as a flavoring agent in foods such as imitation maple syrup, beverages and tobacco.[vi]

Fenugreek's association with hormonal health applies to men and women alike. In addition to studied uses for male sexual health, fenugreek has demonstrated value for women's hormonal health. Women who are at or near menopause can benefit from research on herbs that spotlights fenugreek's effectiveness. A 2016 study showed that an extract of fenugreek husk alleviated postmenopausal symptoms and helped to establish hormonal balance for 88 female study participants having moderate to severe postmenopausal discomforts and poor quality of life.[vii]

Women who are nursing young infants may want this spice in their cabinet, too. A 2005 study showed that giving nursing mothers a combination fenugreek and fennel extract enhanced breast milk quality resulting in improvement of colic symptoms in breastfed infants.[viii]

Similarly, a 2011 study sought to evaluate whether consumption by nursing mothers of herbal tea containing fenugreek had effects on breast milk production and infants' weight gain patterns in the early postnatal period. After studying 66 mother-infant pairs at birth and on the third day post-delivery, researchers concluded that mothers who drank the fenugreek tea had significantly enhanced breast milk production.

The effect on babies' weight was also pronounced: infants who consumed the fenugreek-enhanced breast milk had significantly less weight loss than placebo and control groups, and they regained their birth weight faster.[ix] The timing of supplementation with fenugreek is worth considering since the National Institutes of Health warns pregnant women against taking fenugreek, as it may affect uterine contractions.[x]

Beyond hormonal health, there are numerous reasons why you may want to consider incorporating fenugreek into your diet. Fenugreek seeds have demonstrated significant therapeutic value in the treatment of Type-2 diabetic patients. A 2009 clinical trial studied 24r Type-2 diabetic patients, placing them on a supplementation regimen of 10 grams per day of powdered fenugreek seeds mixed with yogurt or soaked in hot water.

Biometric data such as weight, fasting blood sugar, triglyceride and cholesterol levels were recorded before and after the study. After exclusion of six participants for changes to medication protocols or personal problems, results were calculated for the remaining 18 patients.

Findings showed that fasting blood sugar, triglycerides and LDL cholesterol decreased significantly (25%, 30% and 30.6%, respectively) when fenugreek seeds were soaked in hot water, versus no significant changes in lab parameters when fenugreek was mixed with yogurt. Researchers concluded that consuming fenugreek seeds can be an effective adjuvant in the control of Type 2 diabetes mellitus when seeds are soaked in hot water prior to consumption.[xi]

The blood sugar benefits of fenugreek are further supported by animal studies demonstrating ability to reduce glycemic response and insulin secretion, while also reducing abdominal fat in rats fed a high-sucrose diet.[xii] Another study showed that fenugreek reduced the body weight gain and plasma triglyceride levels that were induced by feeding obese mice a high-fat diet.[xiii]

Considering fenugreek's overall low risk[xiv] and high potential for health value, there is little reason to delay the benefits that may be obtained by adding this common kitchen spice to your regular menu. Search the GreenMedInfo.com fenugreek database for more information on the health-enhancing benefits of this potent botanical. 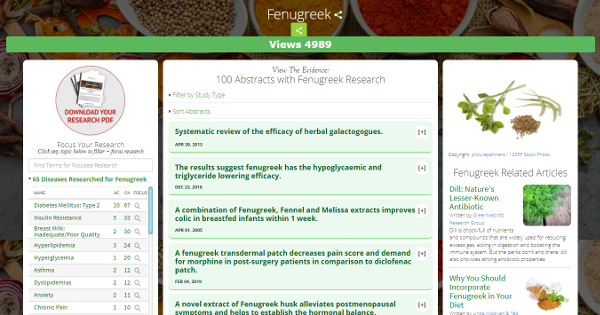