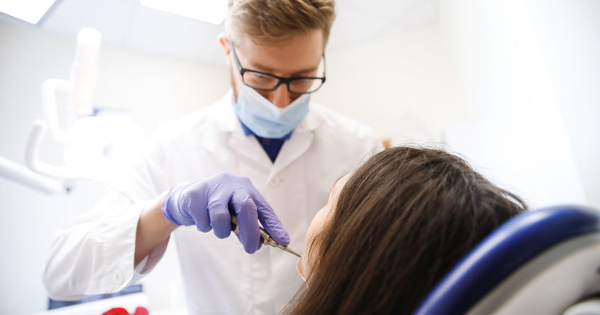 In an astounding about-face to its previous stance, the FDA issued a warning that mercury fillings may adversely affect pregnant women, children and other susceptible individuals, and should be avoided by these groups.

The safety communication1 was posted September 24, 2020, and with this, we have suddenly achieved an incredibly important goal that we've had our sights on for the last decade!

As noted in the FDA's statement:2

"Today, the FDA is issuing updated recommendations concerning dental amalgam and potential risks to certain high-risk individuals that may be associated with these mercury-containing fillings …

The FDA has found that certain groups may be at greater risk for potential harmful health effects of mercury vapor released from the device [amalgam]. As a result, the agency is recommending certain high-risk groups avoid getting dental amalgam whenever possible and appropriate."

Groups identified by the FDA as being at increased risk for harmful effects from dental mercury fillings include:

After years of pressure from Consumers for Dental Choice and its allies, the FDA finally admits the unvarnished truth about amalgam, noting3 that "Dental amalgam is a mixture of mercury and a powdered alloy made up of silver, tin and copper" that "releases small amounts of mercury vapor over time."

The agency also admits there are "uncertainties" and risks associated with this mercury vapor release, especially for the high-risk groups listed. In particular, there is "the potential for mercury in dental amalgam to convert to other mercury compounds in the body," and mercury could potentially accumulate in body fluids and tissues, resulting in "unintended health outcomes."

"These uncertainties in the most vulnerable patients are why today we are recommending people who may be at high risk for adverse health effects of mercury exposure use non-mercury alternatives to dental amalgam, such as composite resins and glass ionomer cement fillings," the FDA states.4

While the FDA downplays the importance of its changed recommendation by stressing that the benefits of dental amalgam likely "outweigh their risks for most patients," this update is nothing short of monumental, and opens the door, finally, for the elimination of dental mercury for all patients in the U.S., as has been done in many other countries already.

I want to take this opportunity to thank all of you who have supported Consumers for Dental Choice during these past 10 years, as it is this organization's unwavering dedication that has now borne fruit.

The FDA is legally required to classify -- that is, issue a rule for -- all medical devices, including dental amalgam. But for 30 years, FDA dodged its legal duty to classify amalgam.

But when July 2009 came around, it was clear the FDA had not considered the science -- especially the evidence of harm amalgam can cause vulnerable populations like children, pregnant women and breastfeeding mothers.

Its abysmal rule reflected this shortcoming, as it did not restrict the use of amalgam for these most vulnerable individuals. The rule did not even require that patients be told that amalgam is made of mercury. Nonetheless, FDA's 2009 rule did acknowledge that amalgam could be harmful, and that there was no proof of safety for the populations most susceptible to this toxin.

In response, Consumers for Dental Choice challenged FDA's rule, while simultaneously pursuing other opportunities to advance mercury-free dentistry, like defeating pro-mercury state dental boards, fighting for amalgam fact sheet laws for patients at the state level, and getting amalgam into the Minamata Convention on Mercury.

Decade-Long Wait Is Over

Nearly a decade after the FDA issued its flawed amalgam rule, Consumers for Dental Choice launched a nonstop campaign focused on getting the FDA to move on amalgam.

They assembled an accomplished team of experts to approach the FDA, and in 2018, unveiled the "Chicago Declaration to End Mercury Use in the Dental Industry" at the University of Illinois School of Public Health.

This declaration, signed by more than 50 heavy-hitter environmental groups, called on the FDA "to bring its policies in line with the Federal Government as a whole and with its responsibilities under the Minamata Convention and to publicly advise a phase down of the use of mercury amalgams with the goal of phasing out entirely."

The declaration also called for the immediate ban on amalgam use in children, pregnant women and breastfeeding mothers. Working with key signatories to the "Chicago Declaration," Consumers for Dental Choice were able to secure meetings with top officials at the FDA, during which they were able to submit scientific studies for the FDA to review.

The first sign of progress came with the FDA's September 2019 scientific review5 of amalgam, "Epidemiological Evidence on the Adverse Health Effects Reported in Relation to Mercury from Dental Amalgam," which recognized that the elemental mercury in dental amalgam can convert inside the body into toxic methylmercury -- the same type of mercury that the FDA warns about in fish.

The FDA also recognized bioaccumulative effects of mercury. Since patients are exposed to many sources of mercury -- including high-mercury fish in their diets, occupational exposures and environmental mercury from waste incinerators -- the mercury from amalgam could be the proverbial straw that breaks the camel's back.

Consumers for Dental Choice also organized a strong showing of public support from you. Its online petition, which had nearly 50,000 signatures, was presented to the FDA in person at its first meeting with the agency. Many of you also submitted public comments on patient preferences to the FDA.

FDA was also made aware of the changes to amalgam rules in other parts of the world, such as amalgam phase-out dates set by the Philippines, Ireland, Slovakia, Finland, Nepal, Moldova, Czech Republic and New Caledonia, and the bans on amalgam use in children issued by the European Union, Vietnam and Tanzania.

Having finally reached the top of the FDA, Consumers for Dental Choice succeeded in persuading the agency to reopen and take another in-depth look at the amalgam policy.

A scientific advisory committee meeting -- which included testimonies by 16 experts from the Children's Environmental Health Network, Tuskegee University, the International Indian Treaty Council, the Organic & Natural Health Association and the Connecticut Coalition for Environmental Justice, as well as city and county commissioners, a physician expert in environmental justice, a pharmacist specializing in toxicology and several attorneys -- took place in November 2019.

You can see Consumers for Dental Choice's team and their colleagues in action in the video below, which features highlights of the advisory panel meeting.

Ultimately, the FDA advisory committee members recommended the agency provide information to patients about the risks of dental amalgam, especially for vulnerable populations. Many even agreed that the use of amalgam needs to end, which has been the goal of Consumers for Dental Choice all along.

Now that the FDA has finally broken its silence on the dangers of mercury for pregnant and nursing mothers, children and people with certain underlying conditions, the final step -- a full ban on amalgam for all -- looms near.

The American Dental Association, which has long defended amalgam's safety, is now running out of allies. For now, however, the ADA still maintains its contrarian view.

In response to the FDA's updated recommendations, the ADA stated6 that there was "no new scientific evidence cited as part of the FDA recommendation," and that the ADA "reaffirms its position that dental amalgam is a durable, safe and effective cavity-filling option."

On the upside, the ADA affirmed its support of patient decision-making, agreeing with the FDA's statement that "all dental restorative decisions and treatment options should be made by the patient and the dentist."

Seeing how the ADA's ethical rules in the past were used by state dental boards to bar dentists from even informing patients about the fact that mercury is a key ingredient in amalgam, and how the ADA deceptively promoted amalgam as "silver fillings," this shift, while small, is better than nothing.

In its September 24, 2020, safety communication on dental amalgam,7 the FDA specifically advises dentists against using the term "silver filling," "as this may imply the filling is made solely from silver and does not accurately convey the mercury component of this restorative material." The FDA also highlights this in its Dental Devices description page for amalgam, which received its last update September 29, 2020, noting that:8

Dental amalgam fillings are often referred to as ‘silver fillings' because of their silver-like appearance, although the use of this term in not recommended because the term does not correctly explain the materials in amalgam."

Most of us who have fought for this updated FDA amalgam policy for the past decade are still in shock that it finally happened, and without any significant forewarning. That said, it is fantastic good news, and we extend our thanks to all of you who have fought this battle with us.

The FDA's updated recommendations change everything, because once amalgam is recognized as a hazard for specific high-risk groups, it doesn't take much to expand that logic to include all people.

What's Lurking in Your Silver Fillings?

It's estimated that 75% of Americans are ignorant about the fact that amalgam fillings are actually 50% mercury, and this is no accident. The American Dental Association popularized the deceptive term "silver fillings" so consumers would think amalgam is made mainly of silver when actually it has twice as much mercury as silver.

Mercury is an incredibly potent neurotoxin; it doesn't take much to cause serious damage because it's an absolute poison. If you were to take the amount of mercury in a typical thermometer and put it in a small lake, that lake would be closed down due to environmental hazards.

Yet, amounts much higher than that are readily put into your mouth if you receive a "silver" amalgam dental filling, as the majority of material in the filling is actually mercury. Download your free copy of "Measurably Misleading" and learn how the FDA and dental industry are misleading consumers and why that's bad for American families and our planet. 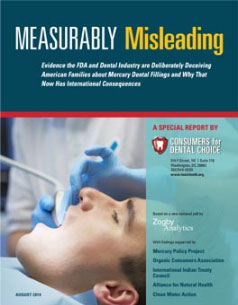 We believe in inspiring progress -- and nowhere is the progress more evident than the work of Consumers for Dental Choice and its Campaign for Mercury-Free Dentistry. So, consider donating your funds where you know it will get results.

Consumers for Dental Choice takes the holistic approach to advocacy. You wouldn't go to a traditional dentist who uses mercury amalgam fillings. So why would you go to a traditional activist to fight for mercury-free dentistry? That's why so many people, including me, support Consumers for Dental Choice's holistic approach to advocacy.

Resources to Help You Find a Biological Dentist

The following organizations can help you to find a mercury-free, biological dentist:

Help Consumers for Dental Choice Get the Funding They Deserve