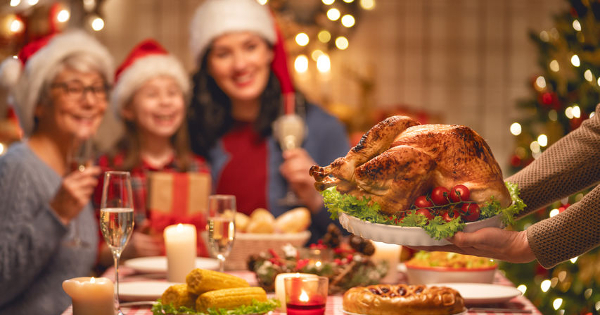 You don't have to sabotage your health when you indulge in festive treats -- just focus on picks from this short-list of healthy (and delicious) holiday eats!

For many, the holiday season can mean loosening your belt and indulging in foods that are normally off-limits. But you don't have to torpedo your health (or your weight) this holiday season. Dip into this list of five healthy holiday foods that will satisfy your desire to indulge in holiday cheer, without the post-holiday guilt.

Turkey is a staple of the holidays. But have you given much thought to how it's raised? Pastured birds are better than factory-raised birds -- better for you, better for the animals and better for the environment. Raising turkeys in a natural setting creates healthier birds, which means more nutritious meat for consumers.

Turkey is a rich source of vitamin B6 and niacin, essential for energy production in the body. Turkey is also high in selenium, an essential mineral for proper metabolic and immune system functioning.[i] Since food labelling standards vary and can be deceptive, consider purchasing pastured turkey from local sources such as farmers markets, where you can talk to farmers and verify how birds are fed and kept.

Heritage turkeys support a network of independent growers that preserve endangered lines of turkey breeds and ensure humane animal treatment. If you don't have this option in your area, seek out "organic" and/or "pasture-raised" birds for the highest quality meat.

Tangy and delicious, cranberries are a festive seasonal fruit that usually make their first appearance on Thanksgiving Day. But don't limit this nutritional powerhouse to special occasions. Cranberries are considered one of the healthiest foods on the planet, so make this bright berry a regular fixture on your fall (and winter) table.

Densely nutritious, 1 cup of raw cranberries supplies around 25% of your daily requirement of vitamin C, 16% RDA of manganese and a healthy dose of vitamins A, K, E and B-complex.[ii] Rich in polyphenols that produce the berry's deep red color, a study[iii] of 20 common fruits found that, gram for gram, cranberries had the highest level of antioxidants, with red grapes placing a distant second.[iv]

Fresh cranberries are the superior choice for health, since most prepared juices and sauces are loaded with sugar. When cooking down raw berries, adding a small amount of raw sugar and fresh orange helps bring these fruits into balance. For a festive and healthy holiday beverage, tame the tartness of pure cranberry juice by mixing with sparkling mineral water and raw honey. Add a cinnamon stick to give it a spicy, seasonal kick.

Another richly colored holiday food, sweet potatoes are known for their bright orange flesh -- unless we're talking about the purple variety -- and naturally sweet flavor profile. Traditional sweet potatoes are rich in beta-carotene, a phytochemical that gives the potato its orange hue. Both the purple and orange varieties are high in vitamins C and B6 and loaded with potassium and fiber.

But it's a little-known compound called anthocyanins that has natural health advocates hunting purple spuds for their holiday dinner plates. Anthocyanins are phytochemical pigments that convey the coloring in foods that appear blue, red or purple. Anthocyanins have demonstrated ability to protect against a myriad of human diseases, thanks in part to their high antioxidant concentrations.[v]

Studies on anthocyanins have demonstrated anti-inflammatory properties that may help prevent alcoholic fatty liver disease.[vi] Anthocyanins have also been epidemiologically associated with a reduced cancer risk.[vii]

A vegetable that you either love or hate, Brussel sprouts are worth taking the time to warm up to. Named after the city in Belgium where they were first widely cultivated in the 16th century, Brussels sprouts are just what they appear to be -- tiny cabbages.

The distaste that some people develop for Brussels sprouts is likely due to a bitter flavor and unpleasant odor that occurs when the vegetable is overcooked, especially when boiled. However, it's important to cook Brussels sprouts rather than consuming them raw, since cooking breaks down glucosinolates into isothiocyanates,[viii] compounds that have been studied for their anticancer effects[ix] and their ability to protect cells against DNA damage.[x]

To prepare Brussels sprouts, clean and slice in half, lengthwise. Roast in a 400-degree F oven with a drizzle of olive oil and seasoning until lightly browned. You can also steam them for around six to eight minutes until just tender, then drizzle with extra virgin olive oil and season with salt and pepper before serving.

No holiday feast is complete without dessert, and what's better for satisfying a sweet tooth than chocolate? Dark chocolate -- the food anomaly that disproves the adage if it tastes good, it can't be good for you -- is a delicious superfood.

Made of high concentrations of cocoa or raw cacao, dark chocolate just might be the greatest health news of all. Cacao generally refers to raw cacao beans, while cocoa refers to cacao beans that have been roasted. Rich in flavanols and antioxidants, dark chocolate is considered a heart-healthy food. Studies have shown that chocolate consumption may be associated with reduced risk of cardiovascular disease (CVD)[xi],[xii] and may reduce the 10-year risk of CVD death by as much as 40%.[xiii]

And if that isn't enough good news, chocolate may help make you smarter. A 2016 study demonstrated that chocolate intake was associated with better brain function,[xiv] and studies on seniors who ate dark chocolate showed that they performed significantly better on cognitive tests[xv] and had lowered risk of cognitive decline than control subjects.[xvi]

That's hardly the end of the story of cacao's powerful health benefits. For example, if you're concerned about diabetes risk from eating dark chocolate, don't be; studies have shown that cacao flavonoids reduce the risks of several chronic diseases caused from metabolic disorders, including Type 2 diabetes[xvii] and obesity.