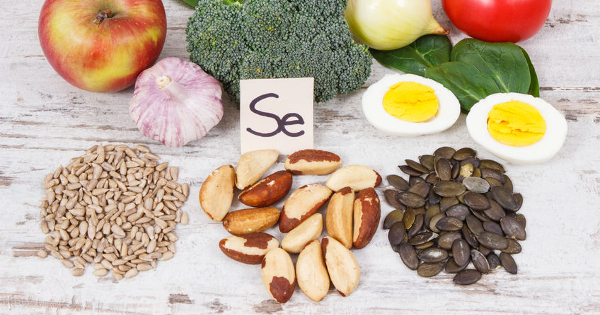 Did you know that selenium, an essential mineral, has the ability to protect your health in multiple ways and is abundant in Brazil nuts?

Selenium is an important mineral for your body and only a small amount is needed (the recommended daily intake is 55 micrograms (mcg)).[1] Due to poor soil,[2] taking certain pharmaceutical drugs such as statins[3],[4] and the normal aging process,[5] selenium is one of the most common mineral deficiencies in the world.

Selenium is linked to many healthy outcomes, including protection from diseases and reduction of disease symptoms. An easy way to help ensure your selenium level is optimal is to eat several Brazil nuts every day.

As an antioxidant, selenium is even more beneficial than vitamins A, C, D and E and helps to decrease oxidative stress, which is the result of an imbalance in the body between free radicals and antioxidants.[6]

Oxidative stress contributes to a variety of diseases such as diabetes, atherosclerosis (hardening of the blood vessels), inflammatory conditions, high blood pressure, heart disease, neurodegenerative diseases (such as Parkinson's and Alzheimer's) and cancers and contributes to aging.[7]

In a meta-analysis of 27 studies with a total of 1,315 patients and 7,181 healthy controls, selenium levels were found to be low in patients with four skin diseases: psoriasis, acne vulgaris, chloric acne and atopic dermatitis.[10]

Another research study of DNA reprogramming  of inflammatory cells confirms that higher selenium levels may instill protective properties for genes important for psoriasis prevention and treatment.[11]

Selenium was also found to be beneficial in the treatment of psoriasis in a systematic review of research.[12] In addition, selenium has been related to improvements in skin aging (skin elasticity and skin roughness).[13]

Asthma (a condition with breathing difficulties, coughing and sneezing) is a complicated disease to treat and is associated with increased inflammation, oxidative stress and abnormal immune system function. In a meta-analysis of 40 studies, asthma patients showed significantly lower levels of selenium compared to healthy subjects, suggesting lower selenium intake could be a risk factor for the disease.[16]

As mentioned, selenium, as an antioxidant, has been found to lower oxidative stress. This,in turn, seems to reduce allergic asthma.[17] In addition, dietary selenium as an antioxidant therapy may be important in optimizing asthma treatment and prevention.[18]

In a study of 25 asthmatic patients and 25 healthy subjects, asthmatics had lower concentrations of selenium, increased oxidative stress markers and inflammation and decreased antioxidant glutathione peroxidase activity and lung function.[19]

Selenium is an essential micronutrient for your body and readily found in the thyroid. As a supplement, it can help prevent immune-mediated thyroid disorders by reducing anti-thyroperoxidase antibody levels and improving thyroid ultrasound features.[21]

The combination of high blood pressure, high blood sugar, obesity and high cholesterol is called metabolic syndrome and when these conditions occur together, they dramatically increase your risk of heart disease, stroke and Type 2 diabetes.[24]

In a study of 2,069 patients, dietary selenium intake had a moderate negative association with metabolic syndrome.[25] In a study of 501 British volunteers aged 60 to 74 years, supplementation with selenium (100 mcg, 200 mcg, 300 mcg) showed progressive decreases in total cholesterol profiles for those with low selenium levels, but cautions that those with already high selenium intake might be adversely affected by extra selenium supplementation.[26]

In a 12-year follow-up of a group of healthy elderly participants who were supplemented with selenium and coenzyme Q10 for four years, there was a significantly reduced risk for cardiovascular mortality in the treatment group (28.1%) compared to the placebo group (38.7%).[27]

A large body of studies suggests that selenium (Se), either as Se-containing compounds or as selenoproteins, is involved in most of the molecular pathways that are important in the progression of dementia and therefore have the potential to help prevent or improve Alzheimer's.[28]

In a mouse model, selenium yeast showed several benefits for Alzheimer's subjects; it decreased the generation of amyloid-β and enhanced autophagic clearance (old cells are recycled and cleaned out to make room for new cells in the brain), which reduced the burden of amyloid-β accumulation.[29]

In 79 Alzheimer's patients, probiotic and selenium co-supplementation for 12 weeks improved cognitive function and some metabolic profiles such as lipid, antioxidant and insulin levels.[32]  Selenium and zinc are essential trace elements and an inadequate dietary intake has been implicated in the decline of immune and cognitive functions in aged persons and influences age-related disorders, such as Alzheimer's and Type 2 diabetes.[33]

Selenium, a widely researched essential mineral, is beneficial to your health due to its antioxidant, anti-inflammatory, neuroprotective, immunomodulatory (regulates immune functions) and cardioprotective properties. See more research about the effects of selenium deficiency and selenium supplementation on overall well-being at GreenMedInfo.com. 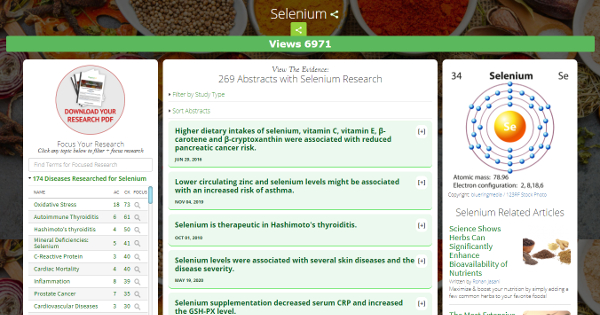