Views 5844
Posted on:
Tuesday, October 27th 2015 at 2:15 pm
Written By:
Kent Heckenlively
This article is copyrighted by GreenMedInfo LLC, 2015
Visit our Re-post guidelines 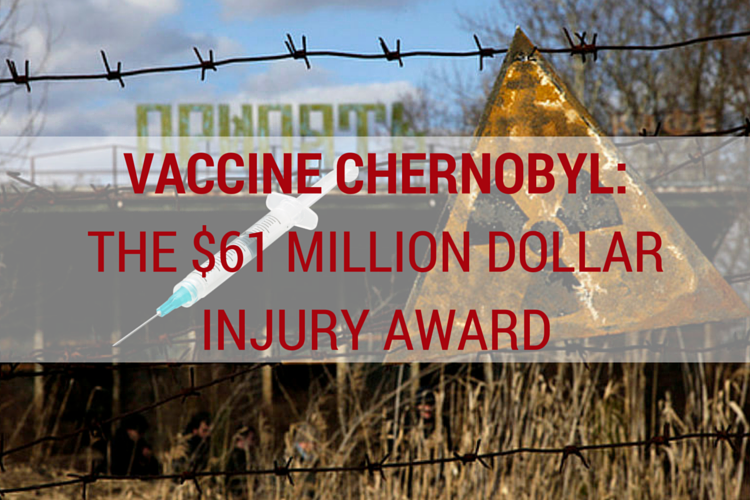 Cancer deaths from Chernobyl have been grossly underreported.  Have we finally reached the "Chernobyl" moment with vaccines and vaccine injuries?

On the 25th of April, 1986, in what history would later realize were the waning days of the Soviet Union, the nuclear reactor at Chernobyl in the Ukraine, near the northern border with Belarus, suffered a catastrophic nuclear meltdown, killing thirty-one people from the initial blast and radiation exposure, sickening thousands more, and creating an "exclusion zone" of approximately 1,000 square miles, which according to some scientists, renders it uninhabitable for anywhere from 180-320 years.  Estimates of cancer deaths from the Chernobyl release range from a low of 4,000 by the International Atomic Energy Agency, to claims in a recent book by three noted scientists, that put the number of cancer deaths at 985,000.

Have we finally reached the "Chernobyl" moment with vaccines?  I thought about this recently when I came across the law firm of Maglio, Christopher, and Toale which lists 291 cases https://www.mctlawyers.com/vaccine-injury/cases/ they have successfully handled for vaccine injuries, including one in which the family of the plaintiff, a girl born in August 2005 and identified only as S.M., was injured by her two month diphtheria, tetanus and acellular pertussis (DTaP) vaccine. (Case No. 08-463V in the United States Court of Federal Claims)  According to court documents, within hours after this vaccination, the child started to have seizures, abnormal breathing, irregular heartbeats, and at one point her heart stopped beating and it took six minutes of CPR to revive her.  The child now has a seizure disorder, encephalopathy, cerebral palsy, and suffers from "cognitive delays."  In July of 2011 the child's family was awarded $61 million dollars to care for their daughter.

Since the vaccine manufacturers have complete immunity for their products thanks to the  National Childhood Vaccine Injury Act of 1986, that means you and me, the taxpayers of this country are paying this bill, thanks to a "tax' put on every vaccine shot.

I've always thought that whoever pays the bill has the right to ask questions.  One of those questions might be, how much has this so-called "Vaccine Court" paid out in damages since it went into operation in 1989?  The answer to that question is somewhere in the neighborhood of $3 billion dollars.  As an attorney I'm used to asking inconvenient questions, so let's get right into them.

Do we think that the $3 billion dollars paid out by this so-called court represents an accurate representation of the damages caused by vaccines?  Let's do a little thought experiment and compare the underreporting of drug reactions to adverse vaccine reactions.  A 2004 systematic review of 37 studies on the issue reported in the journal Drug Safety found that on average, there was a 94% underreporting of adverse drug reactions.  If we use that as our standard then that $3 billion dollars becomes $50 billion dollars.

But I think that's a low estimate.  In the case of drug reactions, you have a previously healthy person who takes a drug, the effects of which can be immediately noticed.  The detection rate is far above what one would expect for a newborn child who has yet to hit all of those developmental milestones.  In the case of my daughter, she developed seizures first (an injury which is actually listed on the vaccine adverse event table and one of the adverse effects suffered by S.M.), before her later diagnosis of autism, but her pediatrician never even raised the possibility it was a vaccine reaction.  By the time I discovered the information I was beyond the statute of limitations.  So, let's say that in addition to the underreporting issue, creating a pool of vaccine injury approximately sixteen times larger than previously understood, I take a lower estimate.  Let's just say that the age issue and medical failure to warn reduces reporting by 90%, a number I think is very conservative.  That makes the damage number about $500 billion dollars.

Now let's add in the 1986 National Childhood Vaccine Injury Act and the so-called "Vaccine Court" it created.  As an attorney I was taught that the road to the truth is a rigorous one, meaning that when life or money is on the line, people are going to lie.  Getting to the truth is a struggle because the natural human inclination is to avoid admitting you have done something wrong.  That's why we make somebody take an oath to tell the truth, and threaten them with jail if they commit perjury.  That's why we have adverse witnesses, allow attorneys to cross-examine witnesses with merciless questions, and require companies and individuals to produce any and all documents which may bear on the issue.  And again, if somebody fails to produce these documents, there are severe consequences.

And none of that happens in the so-called "Vaccine Court." [learn more below]

Witnesses are not compelled to appear, companies do not have to produce documents, and even requests to view the Vaccine Adverse Events Reporting System, a system paid for by your tax dollars, is forbidden to us.  We are told that this is because we trust the pharmaceutical companies and the government agencies to be "self-policing."  We don't even trust the police to be "self-policing."  Let's say this court reduces those complaints by another ninety percent.  That means the true damage from vaccine injuries is $5 trillion dollars.

And what about the mantra parroted by both government officials and pharmaceutical companies that 'vaccines have never been shown to cause autism'?  I suggest you look up the case of Hannah Poling who was awarded $20 million dollars for the development of a seizure disorder and autism (her parents were on CNN and Dr. Poling was even interviewed by CNN's chief medical reporter, Dr. Sanjay Gupta, a fact Dr. Gupta seems to have conveniently forgotten, but can still be found on YouTube) or the wonderfully researched article "Unanswered Questions from the Vaccine Injury Compensation Program" and published in the Pace University Environmental Law Review (March 2011) which revealed that the government has paid out damages in at least 83 vaccine injury cases in which autism was one of the listed injuries.

In my school district of 30,000 students we have approximately 45 "Special Day Classes" and if we are in-line with current autism estimates, about 600 students with autism.  That's not counting all of the other students with various behavioral problems and chronic illnesses, which are in all likelihood linked to a similar pattern of immune dysfunction caused by vaccine exposure.  MIT researcher, Dr. Stephanie Seneff estimates that if current trends continue, 1 in 2 children will have autism by 2025.

If we compare a relatively well-understood event like the Chernobyl nuclear meltdown we see that experts can vary widely in their estimate of damage, from a low of 4,000 deaths to 985,000 deaths.  Thus, it shouldn't come as a surprise that estimates of vaccine damage can range from a low of $50 billion dollars to a high of $5 trillion dollars.  I teach my science students that the thing we often call "facts" are often little more than estimates for questions that may be impossible for us to fully answer.  But if we simply equate underreporting of adverse vaccine events to adverse drug effects we come up with damages of approximately $50 billion dollars.  I fear the total cost is significantly higher.  And unlike some oil-rig explosion in which the well is eventually capped, this damage is continuing every day.

After Chernobyl we were given many explanations for what happened.  We were told that it was a flawed Soviet design, the inadequacies inherent in the communist system, and that this would never take place in the free world.  Then came the nuclear meltdown in Fukushima, Japan on March 11, 2011, the health effects of which we have yet to fully comprehend.  Although the radioactive leakage was significantly less than at Chernobyl, more than 150,00 people have had to be resettled, and it was the largest release of radioactive material ever made into the ocean.

After Fukushima we were told that it was a 1 in 500 year event to have an earthquake and tsunami of such magnitude.  But when we have more than 400 nuclear power plants scattered around the world that doesn't inspire a great deal of confidence.  Maybe the number is different.  Maybe the risk is 1 in 1,000 or 1 in 10,000.  But when we add in the Three Mile Island nuclear accident of 1979 it looks like we can expect to have some sort of catastrophic nuclear accident every ten to fifteen years.

The National Childhood Vaccine Injury Act of 1986 has been nothing less than a nuclear meltdown for the health of our children.  I had thought that Hannah Poling would be the straw that broke the camel's back.  When that didn't happen I expected the Pace University Environmental Law Review article to do the trick.  Surely the media could not ignore the 83 cases in which children with autism had been given monetary damages for injuries that included autism.  Maybe the world would stand up and take notice if a child received a $61 million dollar vaccine damage award.  How can a single person suffer so much that the damage is $61 million dollars?  And even now, we have the spectacle of a CDC scientist, Dr. William Thompson, who has turned over thousands of pages of documents to Congress detailing exactly how government scientists falsified data to erase a link between the MMR vaccine and increased rates of autism.

And yet Congress has still not called Dr. Thompson to testify.  The nuclear power plants continue to function, the "Vaccine Court" plows through its cases, and the mainstream media is silent.  Nuclear power and vaccine programs only continue to exist through massive government subsidies and manipulation of consumer protection laws.  The people are not clamoring for more nuclear power plants or mandatory vaccination programs.  It is government and their corporate masters that want these things and so many of our citizens are silent.  There are days when I wonder whether we will survive as a species.