Vaccine Extremism, Hate Speech, and the Well-Beaten Path Towards Genocide 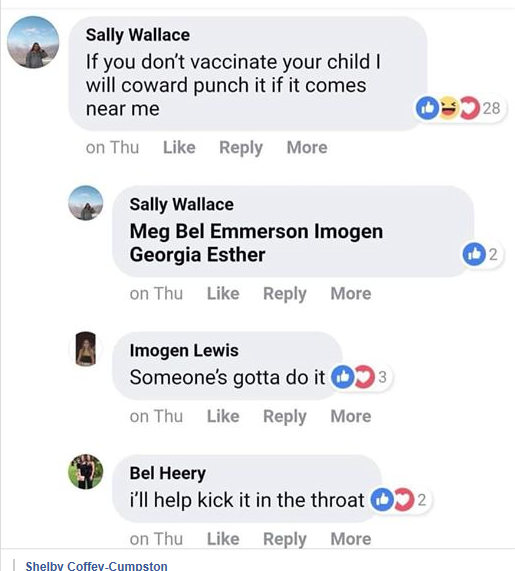 “If you don’t vaccinate your child I will coward punch it if it comes near me.”

Whether paid pharma trolls or actual persons, the comments made by those in the screenshots above are directed against a real parent and, it is safe to say, are intended to intimidate and dehumanize anyone exercising their Constitutionally protected First Amendment rights to abstain from vaccination for religious or philosophical reasons (rights which, recently, have been lost in states like California, New York, and Maine).

In another gesture of violence, screenshotted below, Tim Goldstein says: “I’ll break your fucking jaw you dumb “b*tch. Vaccinate your fukxin kids.” 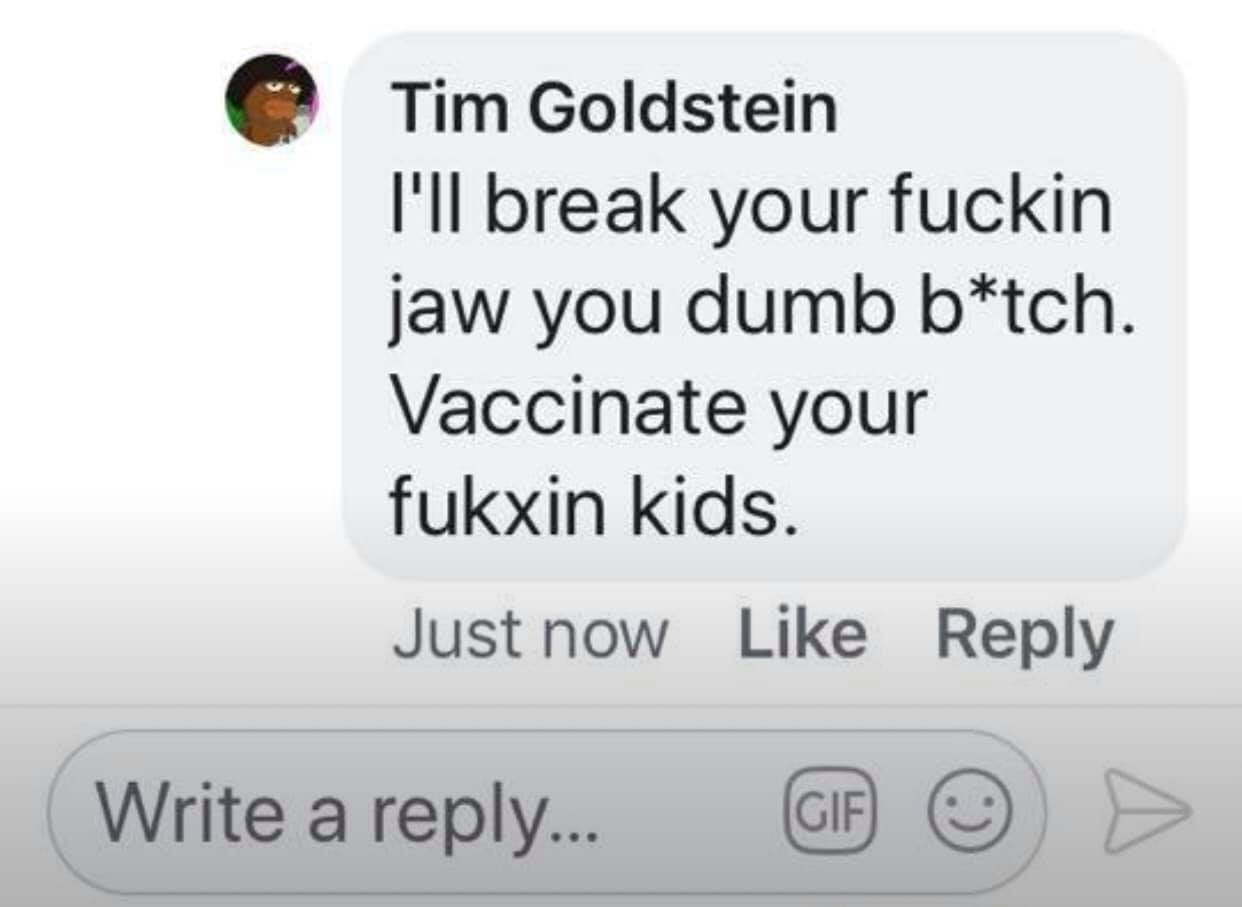 These social media comments bring into high relief a concerning pattern already well established throughout mainstream media representations of the vaccine-hesitant or skeptical (so-called “anti-vaxxers”). The mainstream media’s primary funder, of course, is the pharmaceutical industry, which explains why much of the news has been weaponized against those exercising their Constitutionally protected health freedoms, as well as against informed consent and the parent responsibility and right to protect their children.

For instance, a recent article in the Washington Post is titled, “Anti-vaxxers are dangerous. Make them face isolation, fines, arrests."

Even more egregious, a 2017 Boston Herald op-ed suggested that anti-vaxxers should be hanged. Amazingly, they still haven’t taken their post down, even though it encourages hatred and violence against a minority group. Outlets like the Boston Globe continued onward with concerning rhetoric, including the more recent story headline: "Mounting a ground war against anti-vaxxers".

The Political Apparatus Engages And Reifies The Dehumanizing Rhetoric

But it's not just the media spouting anti-health freedom and dehumanizing messages.  Elected officials, and their staff, are also contributing to the climate of extreme intolerance. Maral Farsi, governor Newsom’s own staff member, recently posted this message to Twitter:

What does she mean by "oxygen thieves"? According to the Urban dictionary:  "a person so useless on this planet that the mere fact of them breathing is a waste of oxygen." This is not an innocent message; it is a public post made by a public servant.

Who really are the target of so much vociferous animosity? The so-called anti-vaxxers? As Jennifer Margulis once suggested, journalists who use the bigotted term “anti-vaxxer” should replace it in their writing with “vaccine safety advocate” which is a far more accurate description of who is being targeted. But the reality is that this is not a political or anarchistic movement (which even search engines like BING are being programmed to depict as violent). The term “anti-vaxxer,” as the social media comments above show, is most likely to be projected onto those parents -- mostly moms -- who have spoken out about their children’s vaccine injuries, often to deaf ears, and increasingly to those who call them liars, dehumanize them, and now threaten them for sharing their stories to warn others.

The concerning examples given above have well-known antecedents in the annals of history. And they fall into a sadly all-too-common pattern of abuse and violence within human history, sometimes referred to as the 10 stages of Genocide... 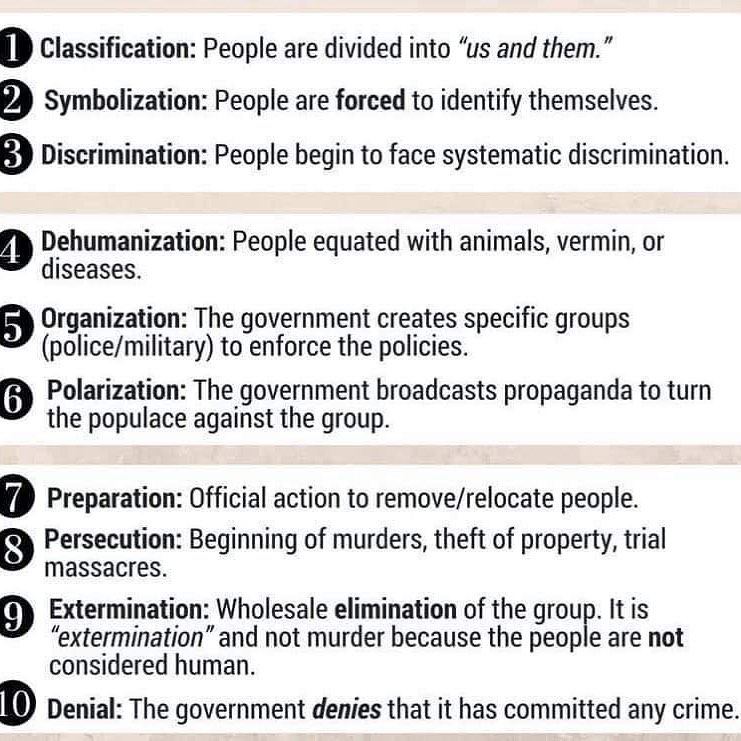 In the summary above, you’ll see that the treatment of so-called "anti-vaxxers" falls somewhere between stages 6 and 7, as evidenced by states like New York and California where you will be removed from school, or not allowed to ride a public bus, if you do not comply fully with the CDC’s vaccination schedule.

Are the Unvaccinated Really A Danger To the Vaccinated?

The disturbing image below (has been alleged) was posted by a mother whose child was pushed away by a pro-vaccine mother who found out she was not vaccinated and in proximity to her vaccinated child.

Violence of this sort only makes sense when you understand how profoundly people are mislead today. The official narrative is that vaccines are unilterally "safe and effective," and therefore those who are not vaccinated must "spread disease" (i.e. they have no natural immunity or protection without medical intervention).

Were the "science settled," as commonly claimed, and the act of vaccinating equivalent to bona fide immunity, the increasingly violent rhetoric against those who will not abide by the CDC’s vaccination schedule would at least appear grounded in something other than brutally misinformed opinion or pseudoscience. Were herd immunity attainable through vaccination -- even with an increasingly necessary load of repeat boosters to compensate for the vaccine's failure to generate sustained protection -- as commonly assumed, perhaps the argument that the non-vaccinated represent harm to those who aren’t able to vaccinate would have solid ground. But neither of these are true, in the unequivocal sense of the term. There are hundreds of peer-reviewed, published papers that call into question these assumptions. You can view some of them on our database, for instance. The reality is that it is not failure to vaccinate, but failing vaccines that are presently driving measles oubreaks in this country. Learn more by reading the following articles:

The Larger Context and Action Steps

The pharmaceutical industry, despite controlling much of the mainstream discourse on this subject, is losing traction. Their products are so unappealing, dangerous, and ineffective that the free market forces could not sustain them; their high liability and the costs associated with it had to be underwritten and compensated for by the government (the National Childhood Vaccine Injury Act of 1986). As RFK Jr. discusses on the California state capitol steps the day health freedom was lost, they’re mandating their products because they know if the truth were revealed en masse no one would rightly administer them to children.

In a recent article we published on the passing of SB 276 titled, "Welcome to Calipharma: Where Your Children are For Profit and Parental Freedoms are Nonexistent," a salient and foreboding quote bears repeating:

The latest Gallup poll shows that of all industries polled the pharmaceutical industry is lowest on the list for consumer trust. The times are a-changing. People are waking up to the truth -- which, incidentally, is why there is such a powerful, global attempt to censor dissenting voices and independent media outlets like our own. Please help us spread awareness by sharing our content, signing up for our newsletter, and consider becoming a member, or making a one-time donation. And please sign up for updates with the new non-profit health freedom advocacy portal: Stand for Health Freedom (501c4).