Vaccines Proven To Cause Sudden Death In Children 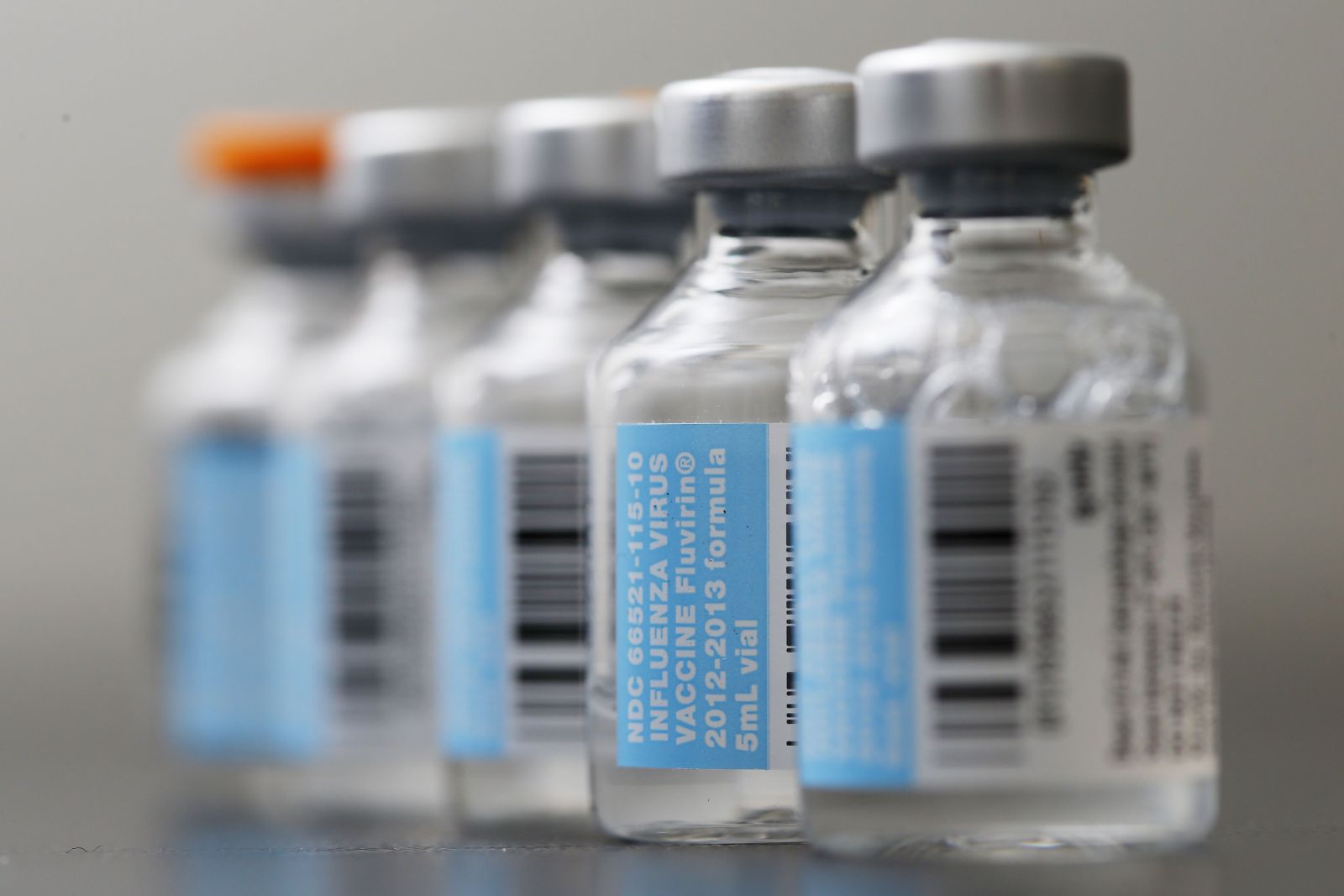 Vaccines Proven To Cause Sudden Death In Children

This confirmation vaccines cause children to die suddenly is only hours old and is conclusive.  There is no room for argument.  It was published today on the US National Library of Medicine's website.

For decades regulators and public health officials have insisted parents were wrong to blame vaccines when their children died suddenly shortly after vaccination.  It was coincidence they would say – nothing more.

The deaths were no more than the number usually to be expected they would add.

But all the time drug safety regulators appear to have been holding the evidence.

A confidential, 1271 page GSK document ordered recently by an Italian Court to be published shows that multiple vaccines cause sudden child deaths.  [The document is a formal confidential previously unpublished submission by GlaxoSmithKline to the European Medicines Agency from 2011 and 2012.]

The GSK document contains data about deaths occurring as a result of administration of Prevenar 13 vaccine [from Pfizer], Infanrix Hexa from GSK and some other vaccines.  Prevenar 13 is given to all British children.

In the past few hours the analysis has been published on the US National Library of Medicines website using the data GSK provided to the European Medicines Agency.  The data is conclusive.  It is very clear and there is no room for argument.

And the analysis is simple.  Anyone can understand it.  The very plain data the document contains proves the matter without any doubt whatsoever.

Here is the key point from the published analysis [but there is more to read online].  It is not rocket science, but very simple to understand:

(Source: Table 36 The GlaxoSmithKline Biological Clinical Safety and Pharmacovigilance report to Regulatory Authority) "... if one analyzes the data looking at deaths in first 10 days after administration of vaccine and compares it to the deaths in the next 10 days, it is clear that 97% of deaths (65 deaths) in the infants below 1 year, occur in the first 10 days and 3% (2 deaths) occur in the next 10 days. Had the deaths been coincidental SIDS deaths unrelated to vaccination, the numbers of deaths in the two 10 day periods should have been the same. Similarly in children older than 1 year, 87.5% deaths (7 deaths) occurred in the first 10 days and 12.5% (1 death) occurred in the next 10 days."

Here is the data presented in a way that the clustering of deaths can be seen clearly: 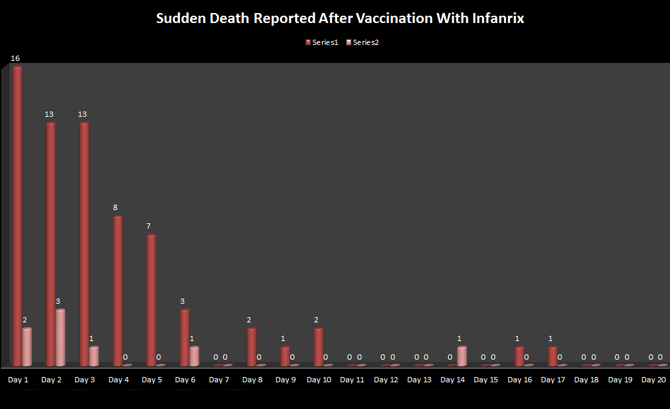 The clustering of deaths around the time of vaccination demonstrates a link between the vaccination and the sudden deaths. It indicates this is not by chance, as otherwise the deaths would be spread across the entire 20 days. Rather than showing the total deaths each day, GlaxoSmithKline disguised the clustering of deaths around vaccination. They did this by listing the cumulative number of deaths. So by Day 19 after vaccination, GSK's total was 67 deaths. But there had only been two deaths in those last 10 days and not 67. In contrast 65 deaths occurred on the first day of vaccination up to the 10th day following vaccination.

And here you can see GSK's Table 36.  The way it is prepared disguises the clustering of deaths around the time of vaccination – the total cumulative number of deaths up to 10 days from vaccination is 65.  That number over the next 10 days increases by only 2.  So in 10 days there were 65 deaths and between day 11 to day 20 after vaccination there were only another two deaths.  So only the vaccine can be the cause of this: 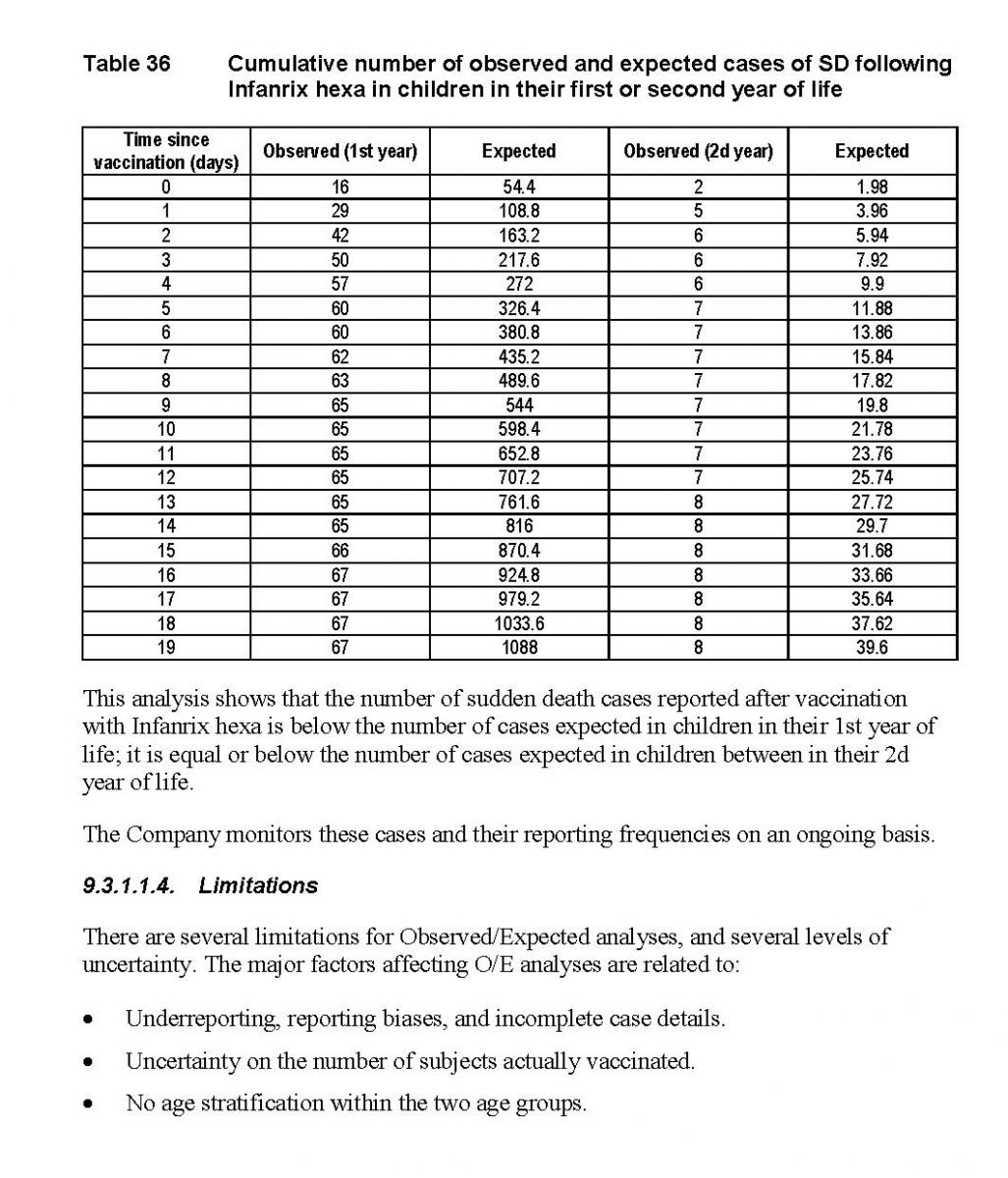 Here is a serious issue.  This kind of information is routinely provided to regulators like the MHRA but never made public.  On the one occasion such a document is published as a result of the actions of a judge in an Italian Court it is possible to show beyond any doubt that multiple vaccines cause sudden deaths in children.

This appears a serious failing of European regulators.

All the EU regulators, including the MHRA, have had this information for at least three years and failed to act on it.

Further, the MHRA has an agreement with the drug industry not to publish information like this despite the provisions of the UK Freedom of Information Act.

And here is an example of how slanted news reporting is.  The following report is not an independent objective balanced report of the facts:

This appears to be a somewhat racist press report, referring to the information being just from India and "the doctor from Delhi" [as if we can all ignore it] and claims the issue is being raised by "anti-vaccine" proponents.  It does not address properly the safety of children nor does it contain any proper overview of the real risks of disease for children against the risks of vaccines nor why there are real causes for concern.

There is clearly an intentional bias.  Criticizing the original edition of this CHS article, prior to this revision to review Popple's report, Popple states:

"The doctor who analyzed the data did not state that there was no room for argument, though. He did not brazenly state that the hexavalent Infanrix vaccine causes sudden death in babies."

It may not have been "brazen" as Popple writes emotionally, but it does look like he did and Popple knows that.  She wrote earlier in the article that the doctor stated:

"... this demonstrates a link between the vaccination event and the sudden deaths."

Dawn Popple does not question whether the information GSK provided is reliable and downplays the way GSK disguised the clustering of deaths around the time of vaccination stating, as if it were the wrong approach [emphasis added]:

"Rather than compounding the total deaths each day, as in the documents found online, the pediatrics doctor suggests we examine how many more deaths happened right after the vaccine was given compared to as the days went by. He said this demonstrates a link between the vaccination event and the sudden deaths."

A substantial omission from Dawn Popple's article is that she does not discuss that GSK has been caught, found guilty of and fined substantial sums of money for serious misconduct, including paying up with the largest health fraud settlement in US history.  But Dawn Popple takes as true what GSK says compared to a doctor, who with courage, has reported publicly this problem with vaccine caused sudden deaths which GSK kept secret and reported in a disguised manner to the safety regulators.

CHS has reported on GSK's problems with fraud and the like before.  Here is an example:

Remarkably, Popple claims this CHS article is by "an anti-vaccine advocate from Child Health Safety."  She has no information to support such a spurious claim.

In other words, normal healthy children are being given vaccines which can kill some of them, who may never have a problem from childhood diseases, even if they caught them.

The report also fails to address the fact that no effective treatments for basic, well-known, longstanding childhood diseases have been developed.  That is a scandal in the scientific 21st century.  If there were effective treatments, vaccines would not be needed.

So not only will the public will not get balanced information, here you can see attacks against the dissemination of information via social media.

With mainstream media reporting about vaccination issues being successfully made a near blackout except for reports promoting vaccines, this article shows how the next targets are likely to be shutting down social media and the internet for people to get information about vaccine issues.

Here from the report is a dubious claim which contradicts and downplays under-reporting of adverse vaccine reactions:

"According to the statistics within the document, even if the doctor from Delhi's fears are spot on, the risk of sudden death, while existent, would also be exceptionally rare after vaccination with the hexavalent Infanrix vaccine."

And interestingly, this article, seemingly reviewing the GSK document and many other publications also has been written in a very short space of time when the material concerned is extensive and would require a very long time to consider it.  It also contains no quotes from sources approached by the author, Dawn Popple, to support what she has written including the statements she makes as if of fact and the opinions she expresses [with no medical or scientific qualifications]. That is very poor journalism in our view.

If you were to form the opinion that her publication https://www.inquisitr.com is trash journalism, you might be right and we would agree.