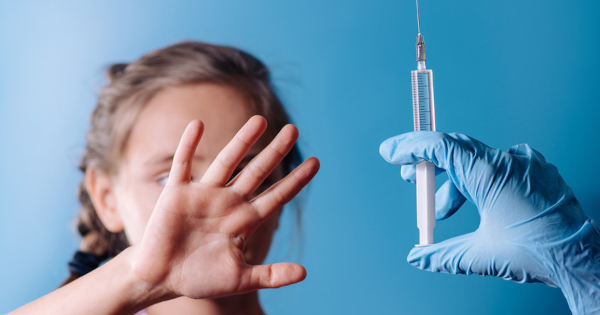 The Centers for Disease Control and Prevention (CDC) released new data today showing a total of 875,653 adverse events following COVID vaccines were reported between Dec. 14, 2020, and Nov. 5, 2021, to the Vaccine Adverse Event Reporting System (VAERS). VAERS is the primary government-funded system for reporting adverse vaccine reactions in the U.S.

Foreign reports are reports received by U.S. manufacturers from their foreign subsidiaries. Under U.S. Food and Drug Administration (FDA) regulations, if a manufacturer is notified of a foreign case report that describes an event that is both serious and does not appear on the product's labeling, the manufacturer is required to submit the report to VAERS. 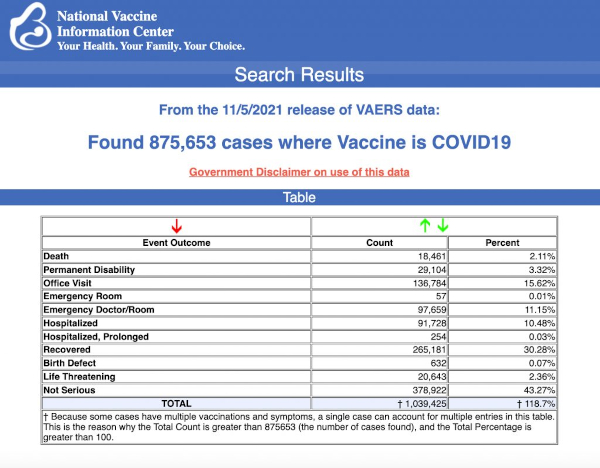 Every Friday, VAERS publicizes vaccine injury reports received as of a specified date. Reports submitted to VAERS require further investigation before a causal relationship can be confirmed. Historically, VAERS has been shown to report only 1% of actual vaccine adverse events.

Numbers this week do not yet include reports from the authorization of Pfizer's pediatric COVID vaccine for the 5 to 11 age group. Reports currently in VAERS for children under 12 are due to "product administered to patient of inappropriate age."

During a meeting on Oct. 26, by the U.S. Food and Drug Administration's vaccine panel, Dr. Jessica Rose, a viral immunologist and biologist, said tens of thousands of reports have been submitted to the Vaccine Adverse Event Reporting System for children ages 0 to 18, and that 60 children have died -- 23 of them were under  2 years old.

"It is disturbing to note that "product administered to patients of inappropriate age was filed 5,510 times in this age group," Rose said. Two children were inappropriately injected, presumably by a trained medical professional, and subsequently died. This is malfeasance."

The most recent death includes a 17-year-old female from Washington (VAERS ID 1828901) who reportedly died Oct. 29 from a heart condition after receiving her second dose of Pfizer. According to the VAERS report, the girl had COVID in August and fully recovered. She received her first dose of Pfizer on Sept. 3 and her second dose on Sept 15.

On Oct. 23, she presented to the ER with chest pain and elevated troponin. She had an abnormal echocardiogram, abnormal EKG and became increasingly tachycardic. She then suffered cardiac arrest.

"Unfortunately she was not able to be resuscitated and died," the report states. "Cause of death possible acute myocarditis."

A 17-year-old girl was hospitalized for Guillain-Barré syndrome (GBS) -- a rare disorder in which the body's immune system attacks its nerves -- after receiving a COVID vaccine. Shelby Allen said she's thankful she isn't paralyzed and didn't die. 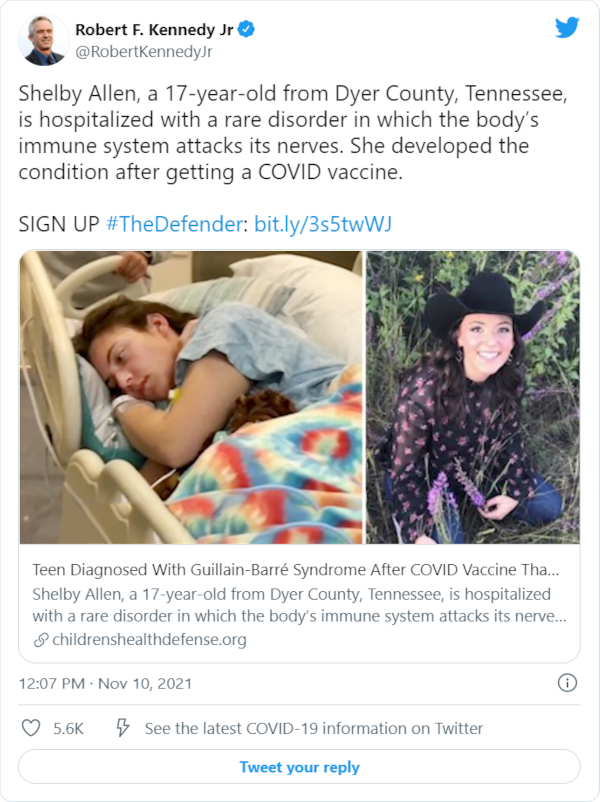 Allen started experiencing back pain and tingling in her arms after getting vaccinated. Symptoms progressed until she found herself unable to feel her arms and legs while bowling with her school's team. Allen's parents took her to the doctor in Jackson, Tennessee, where she was diagnosed with GBS and admitted to the ICU.

Allen's doctor "knew right off the bat" her reaction was caused by a COVID vaccine, but still recommended people get vaccinated. Allen is hoping she'll be able to walk by March for her high school graduation.

The Central Epidemic Command Center (CECC) said on Wednesday a panel of experts is suspending second doses of Pfizer-BioNTech's COVID vaccine for children 12 to 17 years old amid concerns it may increase the risk of myocarditis.

CECC cited U.S. statistics which show the risk of experiencing heart inflammation after receiving a second dose is 10 times higher than after the first dose.

Chen Shih-chung, who heads up the CECC, said the Ministry of Health and Welfare's Advisory Committee for Immunization Practices halted second doses of Pfizer for two weeks, during which time experts and CDC physicians will assess 16 cases of myocarditis among adolescents after Pfizer vaccination before making a decision on whether to go ahead with the second dose.

Hong Kong gives only a single dose to teens 12 to 17, while the UK recommends only one shot for children between ages 12 and 18.

"Within the population aged under 30, this risk appears to be around five times lesser with Pfizer's Comirnaty jab compared to Moderna's Spikevax jab," HAS said.

Germany's advisory committee, known as STIKO, said on Wednesday people under age 30 should receive only Pfizer's vaccine, as it causes fewer cases of heart inflammation in younger people. STIKO also recommended pregnant women receive only the Pfizer vaccine, regardless of their age.

The recommendations were based on new safety data from the Paul Ehrlich Institute -- Germany's authority in charge of vaccines, and new data.

The decision came after several other countries restricted the use of Moderna to older populations, including Canada, Finland, Denmark and Sweden. France's medical regulator on Oct. 15 recommended using only Pfizer's vaccine for booster shots, despite the European Union's drug regulator last month approving Moderna's booster for all age groups over 18.

As The Defender reported Nov. 10, Pfizer and BioNTech on Tuesday asked the FDA to authorize a third dose of their COVID vaccine for all people 18 and older, even though advisory panels to the FDA and CDC in September overwhelmingly rejected a similar request.

The companies said their new request is based on the results of a study, conducted by Pfizer and BioNTech, which has not been published or peer-reviewed. The companies said the study of more than 10,000 volunteers showed vaccine efficacy against symptomatic infection of 95% or greater for people receiving the booster.

Pfizer did not disclose how many participants experienced asymptomatic infection, or whether the clinical trial -- as did Pfizer's clinical trial for 5 to 11 years olds -- included individuals with natural immunity acquired from previous SARS-CoV-2 infection.