Vitamin B12 Fights Nerve Pain and Defends Your Heart and Brain 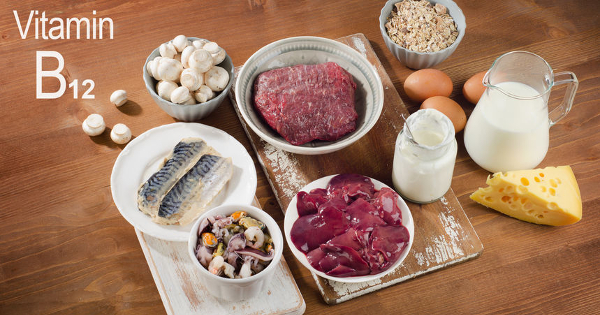 Did you know that a deficiency in vitamin B12 could be an underlying cause of nerve pain and is associated with higher risks for heart disease and increased symptoms and severity of brain disorders? Foods rich in B12, like fish, meats and dairy, are a natural way to restore your health

A vitamin B12 deficiency or lower level of B12 has been associated with a variety of conditions including neuropathic pain, increased risks for heart disease such as obesity, high blood pressure and poor lipid profiles, and cognitive and brain disorders such as dementia, Alzheimer's, Parkinson's, schizophrenia, depression and tremors.

Three Benefits of Vitamin B12

In a review of 24 studies, researchers found evidence for the therapeutic effect of B12 in the treatment of post-herpetic neuralgia, a pain symptom of shingles (strong evidence) and the treatment of painful peripheral neuropathy, which is often associated with diabetes (strongest evidence).[i]

How does vitamin B12 impact nerve pain? B12 promotes myelination, which means it increases the protective fibers and sheaths around your neurons thus improving the efficiency of electrical transmission of neuron processes.[ii] It also increases nerve regeneration and decreases ectopic nerve firing, which is highly correlated with neuropathic pain.[iii],[iv]

The prevalence of vitamin B12 deficiency was significantly high in diabetics, especially those treated with the drug metformin, in a study of 200 patients in Nigeria, and researchers recommended vitamin B12 supplementation to prevent the occurrence of complications such as impaired immunity, peripheral neuropathy and degeneration of the spinal cord.[vi]

Conditions that increase the risk for heart disease include obesity, imbalanced cholesterol, high blood sugar and high blood pressure (when multiple conditions are present, it is called metabolic syndrome).[viii] Research shows a strong relationship between low B12 levels and elevated heart risks.

In a study of 80 middle-aged women, obesity was found to negatively affect vitamin B12 levels, indirectly, by reducing their vitamin D levels, thus increasing the risk for heart disease.[ix] In a large nationally representative sample of U.S. adults (9,075), higher serum vitamin B12 levels were inversely associated with obesity.[x]

Indian patients (75) were studied and those with metabolic syndrome (obese, high lipid profile and high fasting sugar levels) had elevated blood levels of homocysteine, which can contribute to arterial damage and blood clots in your blood vessels[xi] and reduced levels of vitamin B12 compared to the control group.[xii]

An abnormal lipid profile, an independent risk factor for cardiovascular disease, was found in a study of 341 apparently healthy Saudi women, aged 19 to 30 years, who had low vitamin B12 levels.[xiii]

Increasingly, science is showing the importance of vitamin B12 as an excellent food source or supplementation treatment to bolster brain health and decrease brain disorders and cognitive decline in subjects.

Vitamin B12 deficiency was strongly linked to cognition and replacement therapy was suggested as an option to improve patient cognition and memory outcomes and symptoms like numbness and tingling.[xvi]

In 165 elderly (80 years or older) people from Brazil studied, over 35% experienced cognitive decline as measured by the Mini-Mental State Examination; those with higher B12 levels (greater than 19 but lower than 496 nanograms per milliliter) showed less cognitive decline.[xvii]

In a study of postmortem human frontal cortex of 43 control subjects, from 19 weeks of fetal development through 80 years of age, and 12 subjects with autism and nine with schizophrenia, vitamin B12 levels were significantly lower in older control subjects (greater than 60 years of age), reflecting a 10-fold age-dependent decline. Both autistic and schizophrenic subjects' B12 levels were more than three-fold lower than age-matched controls.[xviii]

Parkinson's disease (PD) patients with low vitamin B12 levels (less than 587 nanograms per milliliter) were over five times more likely to develop dementia, with 50% having dementia within five years of PD diagnosis compared with 11% in those with a higher vitamin B12 level; vitamin B12 is a likely treatment to lower future dementia risk for those with Parkinson's.[xix]

In research of 55 outpatients, a low vitamin B12 level was also associated with greater production of a proflammatory cytokine called IL-6 in peripheral blood mononuclear cells compared to the control group; scientists suggest that this neuroinflammatory effect could be implicated in the pathophysiology of Alzheimer's disease.[xx]

Both adults and infants deficient in vitamin B12 may present with chorea -- involuntary muscle movement, tremors, Parkinsonism and dystonia -- cramped toes or feet, or a combination, and these various movement symptoms responded well to vitamin B12 supplementation in a review of cases.[xxi]

B-vitamin treatment (folic acid, B6 and B12) reduces, by as much as seven-fold, cerebral atrophy in gray matter regions specifically vulnerable to Alzheimer's disease, including the medial temporal lobe. B vitamins lower homocysteine, which directly leads to a decrease in gray matter atrophy, and slows cognitive decline.[xxii]

In a case study of a patient presenting with progressive cognitive and functional deterioration, psychosis and seizures, which five years later was found to be secondary to pernicious anemia, vitamin B12 replacement caused a remarkable neuropsychiatric recovery.[xxiii]

Vitamin B12 is known to play critical roles during development and aging of the brain, and vitamin B12 deficiency has been linked to neurodevelopmental and degenerative disorders; Research shows the isoform-specific regulation of PTP-3/LAR PRTP expression is a key molecular mechanism that mediates vitamin-B12-dependent neuronal and glial development.[xxiv]

Food Sources for B12

Nutritional foods in your diet that are packed with B12 vitamin include mostly meats (liver, beef, chicken, turkey), fish (salmon, tuna, trout and shrimp) and dairy products (milk, eggs, yogurt and cheeses like Swiss and feta).

Fermented soy (tempeh) as well as fortified nutritional yeast can also be helpful for vegetarians with a B12 deficiency to increase their B12 intake. Some B12 may also be found in seaweed (one of the most common ones in the U.S. being the purple laver nori sheets used in sushi), shiitake mushrooms and spirulina but experts caution as to the consistency and availability of B12 in these products.

Those who are allergic to or wish to avoid dairy products from cows may find fortified B12 substitutes such as almond milk, coconut milk and cheeses like buffalo mozzarella or feta. Dietary B12 is recommended as the best way to increase your B12 level, but supplements such as chlorella tablets may be a good alternative if nutrition does not adequately address a B12 deficiency.[xxv] See Table 1 for a handy reference to dietary sources of vitamin B12.[xxvi]

B12 -- Essential Vitamin for Nerve Pain, Brain and Heart Health

Many people experience a deficiency in vitamin B12, caused by drugs, aging, diet or other precursors to diseases, which compromises their body. If you would like to read more about the scientific evidence of B12's benefits, see: 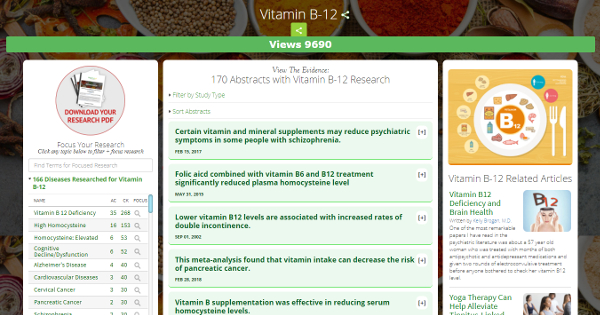