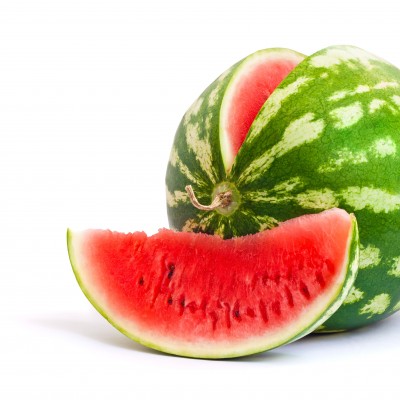 Just looking at a juicy watermelon seems to relax us perhaps because the image conjures memories of lazy summer days and informal meals. But a new study reveals that it's not just in our heads. Eating watermelon lowers blood pressure - it's true

Food scientists at The Florida State University conducted a pilot study of four men and five postmenopausal women, all aged 51 to 57 and prehypertensive. All nine participants showed improved arterial function and lower aortic blood pressure, suggesting that watermelon can be an effective natural weapon against prehypertension, a precursor to cardiovascular disease.

In the first investigation of its kind in humans, researchers administered six grams of the amino acid L-citrulline/L-arginine from watermelon extract to the subjects on a daily basis for six weeks. L-citrulline is converted in the body to L-arginine which is required for the formation of nitric oxide essential to the regulation of vascular tone and healthy blood pressure.

Although L-arginine is available as a dietary supplement, for many people it can cause nausea, gastrointestinal tract discomfort, and diarrhea, whereas watermelon has none of those effects.

Dubbing watermelon a "functional food," the lead author, FSU Assistant Professor Arturo Figueroa, suggested that it has a vasodilatory effect which may prevent prehypertension from progression to full-blown hypertension, a major risk factor for heart attack and stroke.

His co-author, FSU Professor Bahram H. Arjmandi, defined "functional foods" as those "scientifically shown to have health-promoting or disease-preventing properties, above and beyond the other intrinsically healthy nutrients they also supply."

According to the study published in the American Journal of Hypertension, watermelon is the richest edible natural source of L-citrulline, and is also a good source of vitamins A, B6 and C, as well as fiber, potassium and the antioxidant lycopene.

L-citrulline is also available as a supplement and the authors believe that supplementation might allow a reduced dosage of drugs prescribed to control blood pressure. A previous study by Dr. Figueroa showed that four weeks of L-citrulline supplementation slowed or weakened the increase in aortic blood pressure in response to cold exposure which, combined with hypertension, is associated with higher rates of myocardial infarction.

Dr. Figueroa believes that the optimal dose of L-citrulline is four to six grams a day. Since it would take about 4 pounds of watermelon to get a therapeutic dose, it would be impractical to rely entirely on the whole fruit for the benefits of L-citrulline.

But it is not only the L-citrulline that contributes to heart health. Because it is rich in potassium, watermelon also helps keep salt from raising blood pressure.

In addition to its benefits in lowering blood pressure, watermelon has a wealth of other qualities to recommend it. For one thing, its name aptly reflects its 92% refreshing and hydrating water content.

Multiple human studies have shown lycopene's ability to protect against many forms of cancer including prostate, breast, endometrial, lung and colorectal.

The antioxidants found in watermelon also have been found to strengthen the immune system and alleviate symptoms of asthma, osteoarthritis and rheumatoid arthritis. It is even believed to play a role in the prevention of diabetes and to reduce serum glucose levels.

Watermelon and other foods rich in lycopene have anti-inflammatory properties making them natural sunscreens, preventing and repairing sun damage to the skin. This makes watermelon a perfect choice for a hot summer day, but now there are great reasons to enjoy this fruit all year round if you can.