What Are the Benefits of Hyperbaric Oxygen Therapy? 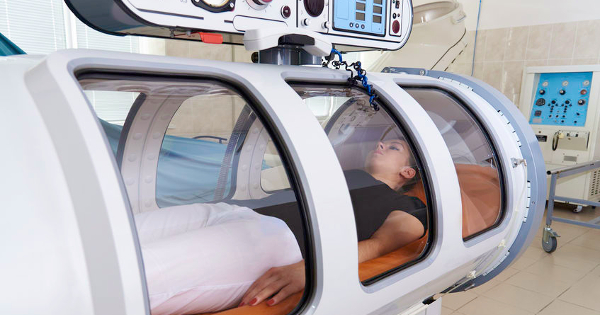 Do you ever feel like you need to breathe deeper than you've ever breathed before? Modern life's daily stressors can deplete your body and make you feel lifeless, but there's a way to get your cells the oxygen they're begging for -- hyperbaric oxygen therapy

Hyperbaric oxygen therapy, or HBOT, is a specialized treatment providing high levels of oxygen to the body that is indicated to help heal wounds and stop infections that occur when damaged tissues are starved of oxygen.[i]

HBOT is typically administered to people with decompression sickness, a dangerous condition experienced by mountain climbers and deep-sea divers undergoing a sudden or severe change in air or water pressure. HBOT is also prescribed to those suffering from issues like burns, severe anemia, carbon monoxide poisoning, gangrene and major tissue injuries.[ii]

Decompression sickness, also called "the bends," occurs when nitrogen in blood and tissues that normally dissipates gradually, instead forms tiny bubbles (much like carbonation) that can damage tissues and block blood flow.[iii]

Besides divers and climbers, individuals with heart defects, asthma and lung disease can develop decompression sickness, as can older and susceptible individuals traveling from sea-level to high-altitude locations.[iv]

Traditionally administered in a hospital setting, today there are private facilities across the U.S. offering hyperbaric treatment for general wellness. Hyper-oxygenating the body has proven to be safe and healthful for civilians and landlubbers alike, so you don't need to suffer "the bends" in order to seek the benefits.

The Benefits of Hyperbaric Oxygen Therapy

The healing mechanism of HBOT involves increasing the percentage of oxygen that is available for tissue repair. First used in the early 20th century to successfully treat someone dying from the flu, HBOT reduces swelling while flooding the tissues with oxygen.[v]

HBOT is recognized as generally safe with a low risk of complications.[vii] While the U.S. Food and Drug Administration (FDA) has cleared HBOT for injuries such as wounds, necrotizing infections, burns, radiation injury and carbon monoxide poisoning, individuals receiving HBOT from a qualified private facility for general wellness are likely to pay out-of-pocket since health insurance is unlikely to cover off-label uses. Depending on the nature of healing that is sought, successful HBOT treatment may require as many as 40 treatments.[viii]

HBOT requires the recipient to lie inside of a pressurized, sealed chamber while breathing highly oxygenated air for a specified period, generally from 30 minutes up to two hours for non-life-threatening conditions. Oxygen chambers can be constructed of rigid or flexible materials but must be airtight with the means of introducing near-100% oxygenated air.

Multi-person chambers are more common outside of a hospital setting. Multiple recipients may be in the chamber at the same time, typically in a seated posture with oxygen administered individually via oxygen masks or head hoods.

Participants are encouraged to rest and relax during treatment but may experience mildly unpleasant sensations such as ear pressure changes like those experienced when taking off in an airplane, or feelings of claustrophobia, fatigue or headache.[ix] Individuals with a cold or fever should not seek hyperbaric therapy, nor should those with recent ear trauma or treatment for ear problems, or certain types of lung disease.[x]

HBOT is considered by some to be the most overlooked and effective prescription drug. It has demonstrated effectiveness in treating neurological disorders such as autism[xi] and schizophrenia,[xii] possibly due to enhanced neurogenesis or healthy replication of nervous system cells, which has been observed in clinical trials.[xiii]

HBOT has shown promise in treating nerve pain,[xiv] headaches[xv] and diseases of inflammation such as inflammatory bowel disease.[xvi] With HBOT acting to reduce inflamed tissues, the potential for healing applications is virtually limitless.

Depression is another neurological condition with possible inflammatory roots. A study released in May 2020 explored the use of HBOT to treat post-stroke depression, or PSD, a common after-effect of stroke that may go untreated, especially in developing countries.

In this meta-analysis, seven electronic databases were comprehensively searched for randomized clinical trials on HBOT through May 2019. Outcomes that were measured included response rate, depression severity, neurological deficit, physical disability and adverse events experienced by HBOT patients. A total of 27 trials involving more than 2,000 participants were identified and reviewed in the analysis.

Another HBOT study, released February 2020 in the journal Case Reports in Pulmonology, explored hyperbaric oxygen therapy as an adjunctive therapy for a nonhealing venous ulcer, a wound on the leg caused by abnormal or damaged veins. The patient in this study was a 65-year-old woman who suffered from systemic sclerosis, a connective tissue disease that caused chronic, nonhealing skin ulcers that caused significant negative impact to quality of life.

Further complications were presented by pulmonary arterial hypertension, a type of high blood pressure affecting arteries in the lungs and heart. At the study's commencement, the patient's nonhealing, lower leg ulcer had caused her mobility to decline to the point where she was confined to a wheelchair and unable to walk. Doctors administered a total of 30 90-minute HBOT treatments over a five-week period, along with prescribed wound care.

The patient steadily improved over the course of a year until her mobility returned to normal levels. Researchers concluded that HBOT was a successful adjunct therapy in her wound management regimen, resulting in complete resolution of the venous ulcer and improved quality of life without any adverse effects on her pulmonary arterial hypertension.[xviii]

While hyperbaric oxygen therapy is generally safe and well-tolerated, there are some instances where it's contraindicated. Speak to a trusted health professional to explore if HBOT may be a useful adjunct to your health and wellness routine.