What Are the Benefits of Moringa Oleifera? 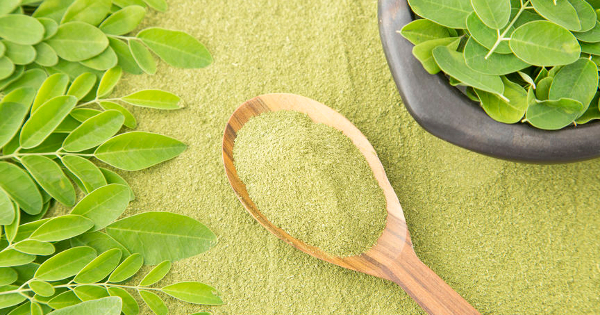 Moringa oleifera is a traditional plant celebrated for its range of health uses, from treating skin disorders to curbing disease-causing inflammation. Here's a closer look at this plant, of which leaf extracts show the highest antioxidant activity of all its parts

Moringa oleifera is a plant with benefits and therapeutic uses that have withstood the test of time and in fact have been hailed for thousands of years.

Chock-full of healthy antioxidants and plant compounds, this large tree is native to North India and known by names such as drumstick tree, ben oil tree and horseradish tree. Nearly all of its parts are consumed or used for herbal medicines, particularly the leaves and pods that are a dietary staple in parts of India and Africa.[i]

There are numerous bioactive components found in moringa, including phenolic acids, flavonoids, isothiocyanates, tannins and saponins, all present in considerable amounts in different parts of the plant.[ii]

Moringa leaves, for instance, provide many vitamins and minerals. A single cup of fresh, chopped leaves, or 21 grams (g), contains 2 g of protein, 19% of the recommended daily allowance (RDA) for vitamin B6, 12% of the RDA for vitamin C, and 11% of the RDA for iron and riboflavin (vitamin B2).[iii] Moringa has a wide range of health benefits that range from skin care to disease prevention and treatment. Here are some of the highlights.

Moringa's leaf extracts show the highest antioxidant activity of all of its parts, with different animal studies highlighting their high degree of safety.[iv] The leaf extracts may also be used as a natural food preservative, increasing the shelf life of meat through reduced oxidation.[v]

Its high antioxidant content makes moringa well-positioned to fight free radicals in the body. These free radicals may cause oxidative stress, which has been linked to chronic conditions such as heart disease and Type 2 diabetes.[vi]

While it is the body's natural response to infection or injury, inflammation may occur for a prolonged period of time and cause chronic health problems, including cardiovascular disease and cancer.[x],[xi] In guinea pigs, moringa leaves prevented hepatic lipid accumulation and inflammation by inhibiting the expression of genes involved in fat metabolism.[xii]

Through its role in altering gut bacteria composition, the plant may also effectively regulate weight gain and inflammation.[xiii] In an animal study, those given a high-fat diet showed significantly reduced intestinal levels of Bifidobacteria and Lactobacilli bacteria, along with increased weight and other markers.

When treated with moringa, their body weight, interleukin 6, and both bacteria levels were significantly restored.[xiv] With its ability to help reduce weight gain, insulin resistance and hepatic gluconeogenesis in studied mice, moringa may be effective in helping to prevent as well as reverse obesity and Type 2 diabetes.[xv]

Moringa is traditionally used to effectively treat inflammatory conditions as well as skin diseases. A preliminary study showed that fermented moringa leaves reduced the clinical features of atopic dermatitis based on macrography, scratching count and severity scores, as well as the animal subjects' serum IgE level.[xvi]

Separate research concluded that parts of the plant seeds regulated the expression of Th17-relevant cytokines and improved psoriasis-like skin lesions in animal models.[xvii] "To our knowledge, this is the first report regarding the mechanism and therapeutic application of seeds to treat psoriasis-like lesions in vivo," the researchers noted.

Moringa leaves also appeared as an alternative therapy to treat skin cancer, with previous studies indicating their anticancer activity against a variety of cell lines.[xviii]

Moringa May Protect Against Alzheimer's Disease

Due to its high antioxidant, anti-inflammatory and neuroprotective effects, moringa has been evaluated in studies for its potential to fight Alzheimer's disease-like pathology in animal models. In Alzheimer's, naturally occurring phytochemicals with the properties mentioned above could be a useful adjunct to treatment.[xix]

The brain's monoaminergic systems, which play a role in memory processing, are disturbed in Alzheimer's cases. Moringa was shown in a separate study to exert its effects in the central nervous system by altering the hormones norepinephrine, dopamine and serotonin.[xx]

According to its results, brain monoamines were altered discreetly in various brain areas in a rat model of Alzheimer's disease.[xxi] After moringa treatment, those levels in brain regions were restored to near-control levels, indicating potential protection by altering brain monoamine levels and electrical activity.

It is well-documented that moringa oleifera can be a good strategy against various health issues, particularly those linked with oxidative stress and inflammatory conditions. These include heart disease, diabetes, cancer and fatty liver.[xxii] The leaves, for one, can be used as a glycemic control agent in cases of diabetes as well as prediabetes.[xxiii]

The GreenMedInfo.com database offers more than 200 abstracts with moringa research, helping you know more about the wondrous benefits of this time-tested therapeutic plant. 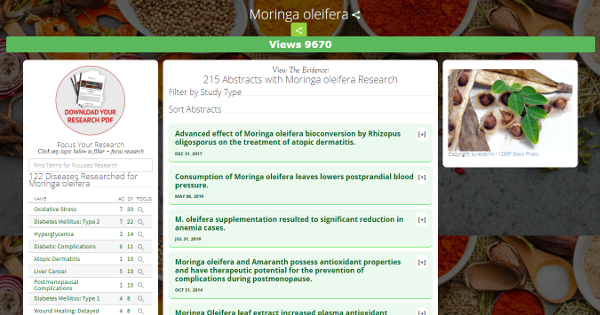 [iii] US Department of Agriculture https://ndb.nal.usda.gov/ndb/foods