What Is Sepsis, and Why Is it One of the Leading Causes of Death? 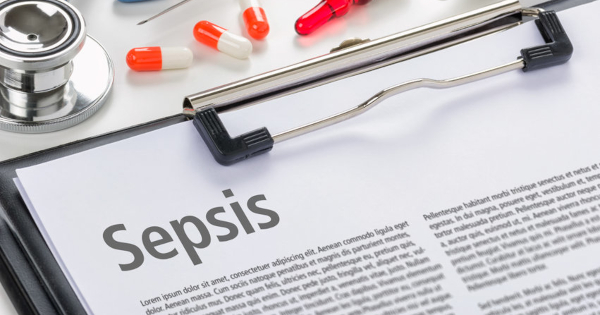 Did you know that a simple paper cut can be a killer? Learn why sepsis is the No. 1 cause of death in U.S. hospitals, and what you can do to protect yourself from this deadly over-reaction to infection

Sepsis is a serious physiological dysfunction that occurs when your immune system has an exaggerated response to an infection, triggering a life-threatening chain reaction of inflammation throughout the body.[i] Sepsis is a leading cause of death, accounting for 1 in 5 deaths worldwide in 2017.[ii] Owing to an increased risk of infection, sepsis is the No. 1 cause of death in U.S. hospitals.[iii]

Sepsis results when a domino effect of autonomic responses creates the perfect storm in the body. The first domino falls when an infection is present. This causes the release of infection-fighting chemicals into the bloodstream. When the body's reaction to those chemicals triggers systemic inflammation, sepsis occurs and can rapidly progress into tissue damage, multiple system organ failure and death.[iv]

The leading causes of sepsis in 2017 were diarrheal and respiratory infections, causing nearly 11 million cases.[v] However, sepsis can result from a wide array of health concerns, like viruses, fungal infections, non-communicable diseases and even accidents and injuries. Sepsis escalates rapidly once it starts, requiring immediate emergency care.

According to the Sepsis Alliance's "Sepsis Fact Sheet":[vi]

Despite these alarming statistics, more than one-third of American adults have never heard of sepsis.[vii]

Are You at Risk for Sepsis?

The first clear risk factor is having an infection. Infections can be bacterial, fungal, viral or parasitic in nature and don't have to be severe to lead to sepsis. Something as small as a bug bite or infected cut can be enough to cause the first domino to fall. Some individuals have a heightened risk for developing infections and sepsis due to their age and impaired health condition. You are most at risk for sepsis if you are:[viii]

Individuals with cancer, diabetes, kidney stones and diseases like malaria are especially vulnerable. Anyone meeting these risk criteria should be vigilant in monitoring symptoms and warning signs.

The Sepsis Alliance has created a memory device to help you recognize and remember the early warning signs of sepsis. It's a reminder that a critical factor to surviving sepsis is catching it in TIME.[ix]

If you have or suspect you have an infection and experience any of these symptoms, including fever, disturbed breathing, low blood pressure, fast heart rate and mental confusion, seek emergency care immediately.

Conventional treatments include strong antibiotics and intravenous fluids. Many sepsis patients are treated in the ICU, with some requiring long-term care. Sepsis is often so traumatizing, both mentally and physically, that post-traumatic stress disorder (PTSD) is a common after-effect. Support groups for survivors[x] can be a vital aid in long-term recovery and the return to a happy, vital life.

Providing daily nutritional support is one of the best things you can do to ensure healthy cells and to facilitate and regulate the biological processes of your body.

Science has validated a variety of natural, nutrition-based ways to reduce your risk of developing sepsis, primarily focused on ensuring adequate levels of key vitamins and minerals. If you are at risk of sepsis, take steps now to prevent a minor cut or bite from developing into this potentially deadly condition.

Blood samples were drawn from adult patients admitted to a hospital emergency room and suspected of having sepsis during the one-year study period. Serum vitamin D levels and the correlation of this vitamin to outcomes such as renal (kidney) failure, liver failure and mortality were assessed.

After assessment of 168 patients, mean serum levels of vitamin D were below normal for 61.6% of patients admitted to the hospital for sepsis. Both age and mortality were significantly correlated with mean vitamin D, meaning older patients and those who died were more likely to be deficient in vitamin D.[xi]

A study published in August 2020 found Level 1 and 2 evidence supporting the use of vitamin D supplementation in the fight against sepsis, as well as acute respiratory diseases that can lead to sepsis.[xii] Level 1 evidence involves systematic review or meta-analysis; Level 2 refers to evidence derived from at least one large-scale randomized controlled trial.[xiii]

The evidence for using vitamin C to fight sepsis is strong. Multiple published studies have reviewed the practice of incorporating vitamin C in the treatment of septic patients, revealing a marked reduction in mortality and duration of vasopressor administration, a key treatment for septic shock.[xiv]

A study published in the Journal of Research in Pharmacy Practice found that high-dose vitamin C (ascorbic acid) may be considered as a safe and effective adjunct therapy in patients who are critically ill with sepsis.[xv] During the study, patients in the ICU with septic shock who were given intravenous ascorbic acid every six hours required significantly lower doses and lesser duration of vasopressor drugs to maintain blood pressure.[xvi]

Supplementation with probiotics is considered a safe and supportive practice to combat the effects of environmental pollutants and unhealthy diet. Adding health-promoting bacteria to your gut may also help reduce the inflammatory cytokine storm of sepsis.

A 2018 study evaluated the effect of probiotics on cytokine levels of critically ill children with severe sepsis. The double-blind, placebo-controlled trial enrolled children from 3 months to 12 years of age who were hospitalized with severe sepsis and randomized to placebo or probiotic groups.

Selenium is another essential nutrient to the health of your immune system. A trace element that is naturally present in some foods, selenium plays a key role in protecting the body from oxidative damage, including that caused by infection.[xx] Selenium deficiency is linked to biochemical changes that predispose people to disease, including viral infections and immune system dysregulation.[xxi]

Studies on preterm neonatal infants have shown that low selenium concentrations are associated with increased risks of diseases related to prematurity.[xxii] Meta-analysis of the pooled data showed a significant reduction in the number of infants having one or more episodes of sepsis when provided selenium supplementation.[xxiii]

To learn more about the dangers of sepsis and how to shore-up your health through strategic, high-quality supplementation, consult GreenMedInfo.com's research database, the world's most widely referenced, evidence-based natural medical resource.