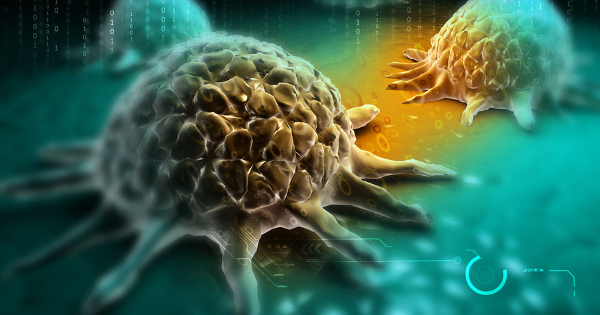 Have you ever wished that someone's cancer would magically disappear? For dozens, maybe hundreds of patients each year, this is exactly what happens. It's called spontaneous regression, and it has medical science baffled

While it may sound like a fairytale or, at best, a one-in-a-million anomaly, cases of spontaneous healing from cancer have been documented in the scientific literature for hundreds of years -- with surprising frequency. In 2002, more than four articles were published on the subject in medical journals in an average month.[i]

From the case of "St. Peregrine's tumor" that disappeared in the 13th century[ii] to a recorded remission case in Paris in 1742,[iii] the phenomenon of spontaneous regression of cancer has long baffled doctors and, undoubtedly, delighted patients who, in many cases, went on to lead healthy lives without a recurrence of cancer.

While cases of spontaneous and complete healing from cancer are not always the norm, they have been accepted as medical fact. What no one can explain, not even the physicians who attended these miraculous cases, is how or why it happens.

The National Cancer Institute defines spontaneous regression from cancer as: a decrease in tumor size or extent of cancer in the body, without any apparent cause.[iv] Thanks to a modern medical system that prioritizes invasive surgical procedures and pharmaceutical interventions over understanding the body as a self-healing mechanism, science has cleared up none of the mystery in recent years.

The War on Cancer Is Failing

With $175 billion projected to be spent treating cancer in 2020,[v] the failed war on cancer has spawned a successful industrial complex involving not just doctors and patients, but hospitals, governmental agencies, nonprofits, pharmaceutical companies and a host of other specialized service providers and equipment manufacturers. Despite this hyper-investment, researchers have concluded that today's cancer patients have no better prognosis than patients treated 50 or more years ago.[vi]

Despite the grim and discouraging realities of allopathic medicine's approach to cancer treatment, there are numerous examples of cancer making an abrupt about-face and retreating, without conventional interventions.

What follows are several recent cases of spontaneous cancer regression that stimulate intrigue and inspire questions regarding why and how they occurred. Perhaps more importantly, such cases also serve as inspirational examples of what's possible when your body's powerful self-healing mechanisms are triggered.

A case of spontaneous healing was published in 2014 in Oxford's Quarterly Journal of Medicine,[vii] detailing a previously healthy 74-year-old Irish woman who was referred to a dermatologist for treatment of a rash on her lower leg that had persisted for three months. Weeping wounds and discoloration of the skin between the knee and the ankle were determined through biopsy to be squamous cell carcinoma, a form of skin cancer.

Treatment options discussed with the patient by the primary care team included above knee amputation, radiation therapy and systemic chemotherapy, none of which were desired by the patient.

At a 12-week follow-up appointment, doctors observed a clinical reduction in the number and size of lesions on the woman's leg. At 20 weeks after initial presentation, all the lesions on her leg had resolved and there was no cancer detected on PET scans of her leg or elsewhere in the body. The patient returned every six months, and after 18 months the patient remained disease-free.

While the hospital care team was unable to explain the cancer's sudden and complete reversal, Alan Irvine, the patient's doctor at St James' Hospital, Dublin, said that his patient did not require a medical explanation. She attributed her miraculous healing to God's grace, and the simple act of kissing a religious relic in a moment of faith and devotion.[viii]

Is Injury a Stimulus to Self-Healing?

A 2019 research paper[ix] from the Department of Radiology at Shiga Medical Center Research Institute in Japan, describes a case of spontaneous regression of T-cell lymphoma in a 74-year old man who presented with persistent abdominal pain.

One and a half months after biopsy, the patient presented at the hospital for a PET/CT scan prior to beginning chemotherapy. The scan showed the complete disappearance of all lesions. With no lesions to treat and new bloodwork showing normal levels, the patient was released without any active treatment.

Doctors involved in treating the patient had no explanation for the spontaneous regression other than to hypothesize that the excisional biopsy could have been a "triggering trauma" that stimulated the self-healing mechanism. This asserts that the patient's immune response to the relatively minor trauma of a surgical biopsy may have been the cause of this spontaneous cancer regression.

A 2020 case report presents an incidence of spontaneous regression in a patient with an invasive tumor on the base of the skull called a clival chordoma.[x] Chordomas are potentially life-threatening tumors that are typically removed surgically, then treated with focused radiation.

At the time of diagnosis, the patient's scans revealed two masses centered in the nasopharynx measuring nearly 9 centimeters in circumference. Pre-operative imaging taken two months later showed that the mass had spontaneously regressed by nearly 62%, to a total size of just over 3 centimeters. The patient had undertaken no therapies in the interim between diagnosis and preparation for the surgical procedure.

Due to the significant reversal of the tumor, surgery was no longer indicated, leaving doctors to speculate as to whether natural food-based supplements could have been responsible for this patient's "miraculous" spontaneous regression. The patient had been taking a regimen of herbal and oil supplements that were available in health food stores.

This case centers on a confirmed diagnosis of breast cancer after a routine mammogrram.[xi] Biopsy results identified an invasive carcinoma in the left breast of a 72-year old female patient with Type 2 diabetes and high blood pressure. The procedure, performed by core needle extraction, further showed that the dense breast tumor had already been subjected to a robust natural immune response by the presence of activated cytotoxic T-cells in the tumor area.

The patient's cancer treatment began with diagnostic biopsies on day 27 after initially presenting to the medical team. These biopsies confirmed cancer and a rapidly growing axillary metastasis in the left-side lymph nodes. On day 83, less than two months after the initial cancer diagnosis, the patient presented for removal of the tumor and affected lymph tissue.

After the procedure was performed, specimen mammography showed that the lesion and surrounding critical area were successfully removed. What surprised doctors was the fact that the 82-gram mass showed no residual cancer and no lymph node metastases were detected at this time. Repeated breast imaging was performed on day 131, showing no signs of residual disease of the breast.

The case was labelled a spontaneous regression of a high-grade, triple-negative breast cancer with axillary metastasis, something that the authors called "a surprising phenomenon." The patient had undergone no changes in diet or medication routine throughout the entire treatment period and professed to no alterations in these habits for many years prior to diagnosis of cancer.

Histological samples of the tumor showed that the patient's innate immune system response to cancer had been aggressive, with virtually every tumor cell coming into direct physical contact with anticancer lymphocytes. The medical team had no definitive explanation to offer for the cancer's spontaneous regression, but suggest that tumor-infiltrating lymphocytes may be responsible for spontaneously overcoming the cancerous growth.

Programmed for Health or Disease?

The review identified that all spontaneously regressed tumors displayed a genetic profile characterized by down-regulation of certain metabolic processes, including the MYC gene associated with the formation of cancer, as compared to non-regressing CLL.

Additionally, spontaneous regression was associated with reversal of "T-cell exhaustion features," including reduced apoptosis, or cellular death, and increased T-cell proliferation. Far from uncovering the magic bullet for spontaneous regression, the thorough review produced little more than novel insight into the phenomenon.

The research team concluded that spontaneously regressing cases of CLL "appear to undergo a period of proliferation before entering a more quiescent state, and that a complex interaction between genomic alterations and the microenvironment determines disease course." In plain speak, they merely observed that in these cases, the cancer initially proliferates, then regresses, and the causes and the processes of recovery are highly individualized to each patient.

Can Cancer Simply Fade Away?

To better understand the pathogenesis of spontaneous regression, the authors presented their experiences with a 73-year-old man who regressed without treatment. The Caucasian male patient was a long-term smoker with a history of low grade, non-invasive bladder cancer that had been recently treated. Symptoms included shortness of breath and difficulty breathing when exerting.

The patient was evaluated for surgical lung resection and radiation therapies, but transportation issues prevented the patient from making medical appointments.

Reasonably, the patient continued to delay medical interventions considering the promising healing trend. Two additional scans were performed at three-month intervals, followed by a six-month scan, all of which showed continued diminution of the mass, with no evidence of active disease. Further blood tests supported the findings of spontaneous and complete cancer regression.

To learn more about spontaneous tumor regression, you can access more than three dozen research abstracts on GreenMedInfo.com. 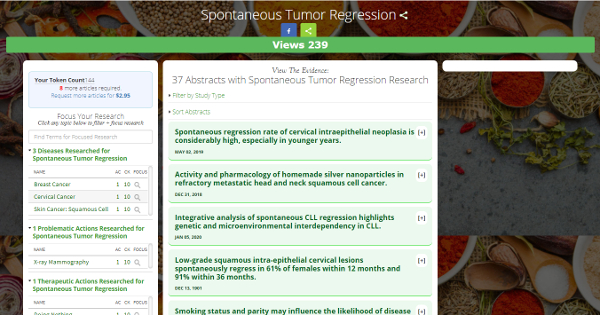