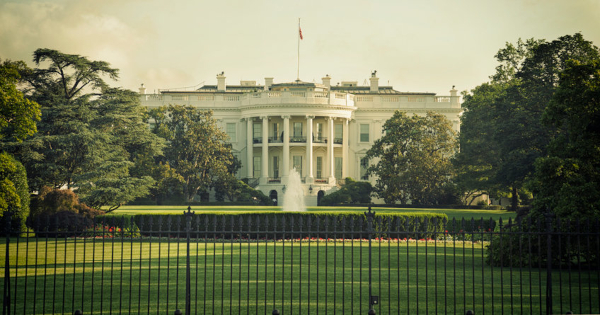 According to Politico, the Biden administration may be taking a step further in curbing vaccine misinformation by monitoring private social media and text messages

The Biden administration and allied groups, including the Democratic National Committee (DNC), are "planning to engage fact-checkers more aggressively and work with SMS [Short Message Service] carriers to dispel misinformation about vaccines sent over social media and text messages," according to a report today in Politico by White House correspondents Natasha Korecki and Eugene Daniels.

The initiative is part of the administration's attempt to get more people vaccinated for COVID after failing to reach its goal of having 70% of American adults receive at least one vaccine dose by July 4.

"We are steadfastly committed to keeping politics out of the effort to get every American vaccinated so that we can save lives and help our economy further recover," White House spokesperson Kevin Munoz said, according to Politico. "When we see deliberate efforts to spread misinformation, we view that as an impediment to the country's public health and will not shy away from calling that out." 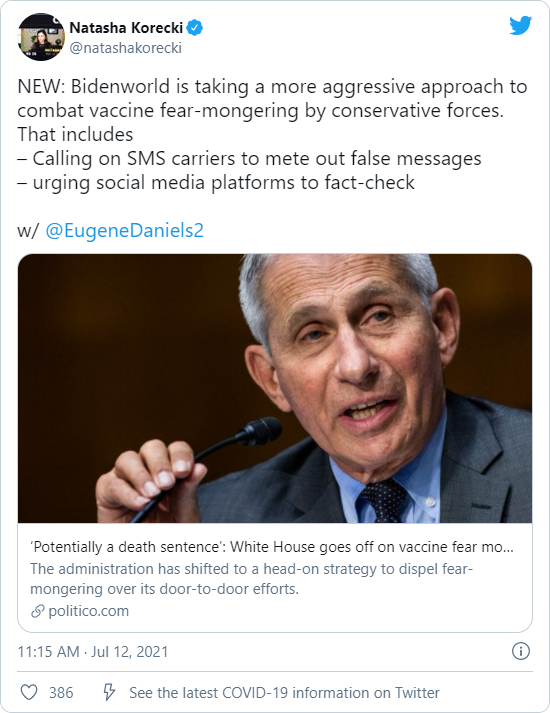 Politico did not clearly define what the administration meant by "monitoring" of text messages, including if messages would be flagged or if they would be prevented from being delivered.

The media outlet also did not clarify how the administration or social media platforms would determine what exactly constitutes "misinformation." 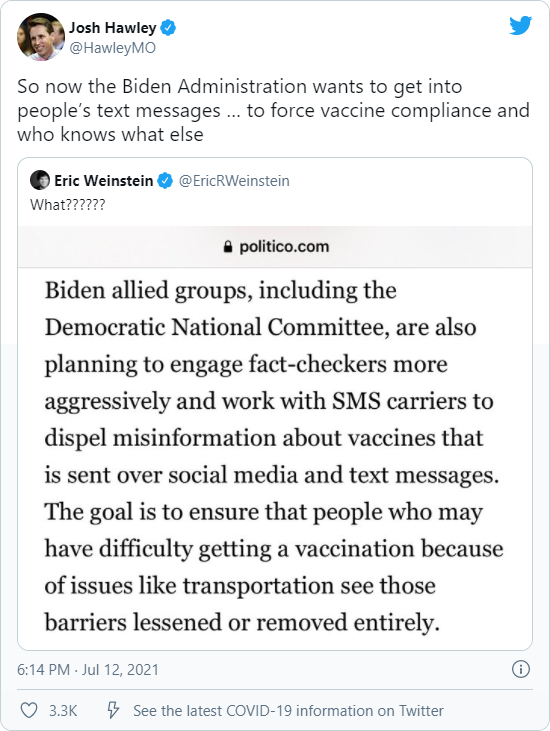 This isn't the first time the White House signaled its intent to work with social media platforms to monitor or suppress information it believes will deter people from getting the vaccine.

As The Defender reported in February, the White House asked Big Tech giants Facebook, Twitter and Alphabet Inc.'s Google to "clamp down on chatter that deviates from officially distributed COVID-19 information," according to the New York Post and other news reports. 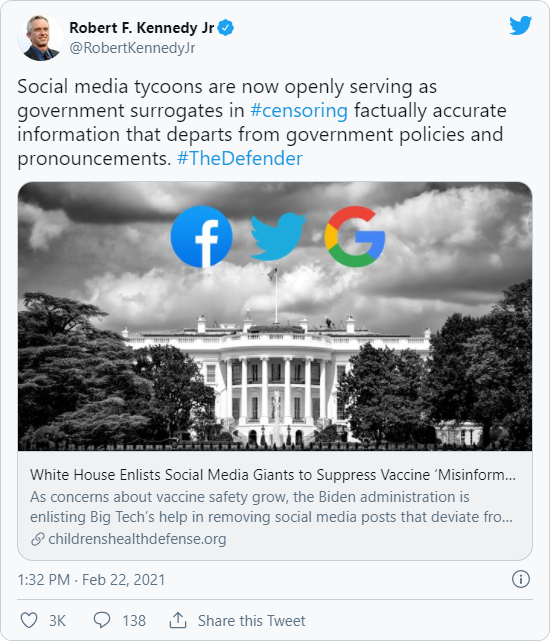 Reuters reported that Biden, concerned that "fear about taking the vaccine has emerged as a major impediment" to his administration's pandemic plan, wants help from the social media moguls to keep "misinformation" from going viral.

The Biden administration faced backlash last week after President Biden announced plans to ramp up the federal government's efforts to get more Americans vaccinated by going "door-to-door" to encourage Americans to get vaccinated.

"The big misinterpretation that Fox News or whomever else is saying is that they are essentially envisioning a bunch of federal workers knocking on your door, telling you you've got to do something that you don't want to do," said Fauci.

"That's absolutely not the case, it's trusted messengers who are part of the community doing that -- not government officials," he added. "So that's where I think the disconnect is."

Last week South Carolina Gov. Henry McMaster, in a letter to the South Carolina Board of Health and Environmental Control, wrote: "Enticing, coercing, intimidating, mandating or pressuring anyone to take a vaccine is a bad policy that will deteriorate the public trust and confidence in the state's efforts."

McMaster said he was going to prohibit the state health agency from using the administration's targeted tactics.

Psaki responded to McMaster's letter, saying it was a disservice to the country to provide "inaccurate disinformation at a moment when we're still fighting a pandemic" and that "the failure to provide accurate public health information, including the efficacy of vaccines and the accessibility of them to people across the country, including South Carolina, is literally killing people, so maybe they should consider that."

Psaki said the administration has "engaged with local community groups and pastors to handle door-to-door sharing of information with neighbors about the vaccines" for months.

According to Politico, the Biden administration has teamed up with the COVID Collaborative, which describes itself as a "diverse and comprehensive team of experts, leaders and institutions in health, education, and the economy" which works to "develop consensus recommendations, and engage with local, state and national leaders."

The collaborative, an initiative of the Office of American Possibilities, charted vaccine hesitancy by zip code and is working to convince people to get vaccinated as part of the door-to-door campaign.

The COVID Collaborative has partnerships with the CDC Foundation, which partners with Pfizer and the Pfizer Foundation. It also has partnerships with The American Medical Association, American Academy of Pediatrics, The Rockefeller Foundation, National Association of Manufacturers (which also partners with Pfizer), and numerous organizations that receive funding from pharmaceutical companies that manufacture COVID vaccines.

COVID Collaborative co-founder John Bridgeland said his group had already seen a shift on the ground with people shutting doors "in their faces because they don't want to get vaccinated."

Bridgeland's biggest concern is that "these lies convince communities [who] are already wary of the vaccines, creating sects of the country where the virus just bounces among the unvaccinated."