Whooping Cough: The Reality Behind the Myth

I like to watch a little bit of mainstream news to keep abreast of the information, or misinformation, being fed to the general public.   A few nights ago I saw a report on the evening news effectively blaming unvaccinated kids for the 2010 outbreak of whooping cough in my home state of California based on a retrospective study published recently in the journal Pediatrics.  The next morning headlines read "Anti-vaccine parents caused California's lethal whooping cough epidemic" and "Unvaccinated children helped fuel whooping cough outbreak, data show."  Let's start from the beginning.

There were reports of outbreaks starting in the 16th century but Bordetella pertussis was not isolated until 1906. [1]  Whooping cough is a toxin-mediated disease associated most commonly with the gram-negative bacterium B. pertussis and the lesser-known B. parapertussis.  The bacterium attaches to the cilia (hair like projections) of the epithelial cells in respiratory tract and produce multiple antigens including pertussis toxin (PT), filamentous hemagglutinin (FHA) and adenylate cyclase toxin (ACT).   These antigens work together to evade host defenses and paralyze the cilia inhibiting the host's ability of the to clear pulmonary secretions.  The incubation period can last from 4-42 days. [1]

A symptomatic infection can run through three classic stages.  The first is the catarrhal stage in which the person exhibits symptoms similar to the common cold including runny nose, sneezing, low-grade fever and mild cough.  The cough may gradually increase in severity over the course of 1-2 weeks leading to the second stage referred to as the paroxysmal stage.   The person has sudden bursts, or paroxysms, of coughs that occur more frequently at night.  The rapid succession of coughs, which may result in cyanosis (turning blue), emesis (vomiting) and exhaustion, is a labor-intensive attempt to expel thick mucous from the lungs.  At the end of a prolonged coughing spell, a quick inspiratory effort infrequently creates the characteristic high-pitched whooping sound.  This stage may last up to 10 weeks. [1]  In the convalescent stage, the cough gradually reduces in frequency and severity.

Symptomatic Bordetella infections that progress into the paroxysmal stage can cause serious complications in very young infants who have a relatively small trachea and who haven't learned to optimally engage their abdominal muscles during coughing.  A lack of maternal protection from breast-feeding and suboptimal care increase the likelihood of a severe course.  The most common cause of death is from a bacterial co-infection resulting in pneumonia. [1] Although health officials like to portray severe sequelae as a common occurrence, presumably to increase vaccine uptake, most cases are relatively mild [26] or completely asymptomatic.

A nationwide vaccination program was started using the DPT (Diphtheria toxoid, Tetanus toxoid, whole-cell Pertussis) vaccine in the 1940's but not before whooping cough deaths had fallen by more than 92 percent in the United States from its peak in the early 1900s. [6,11] 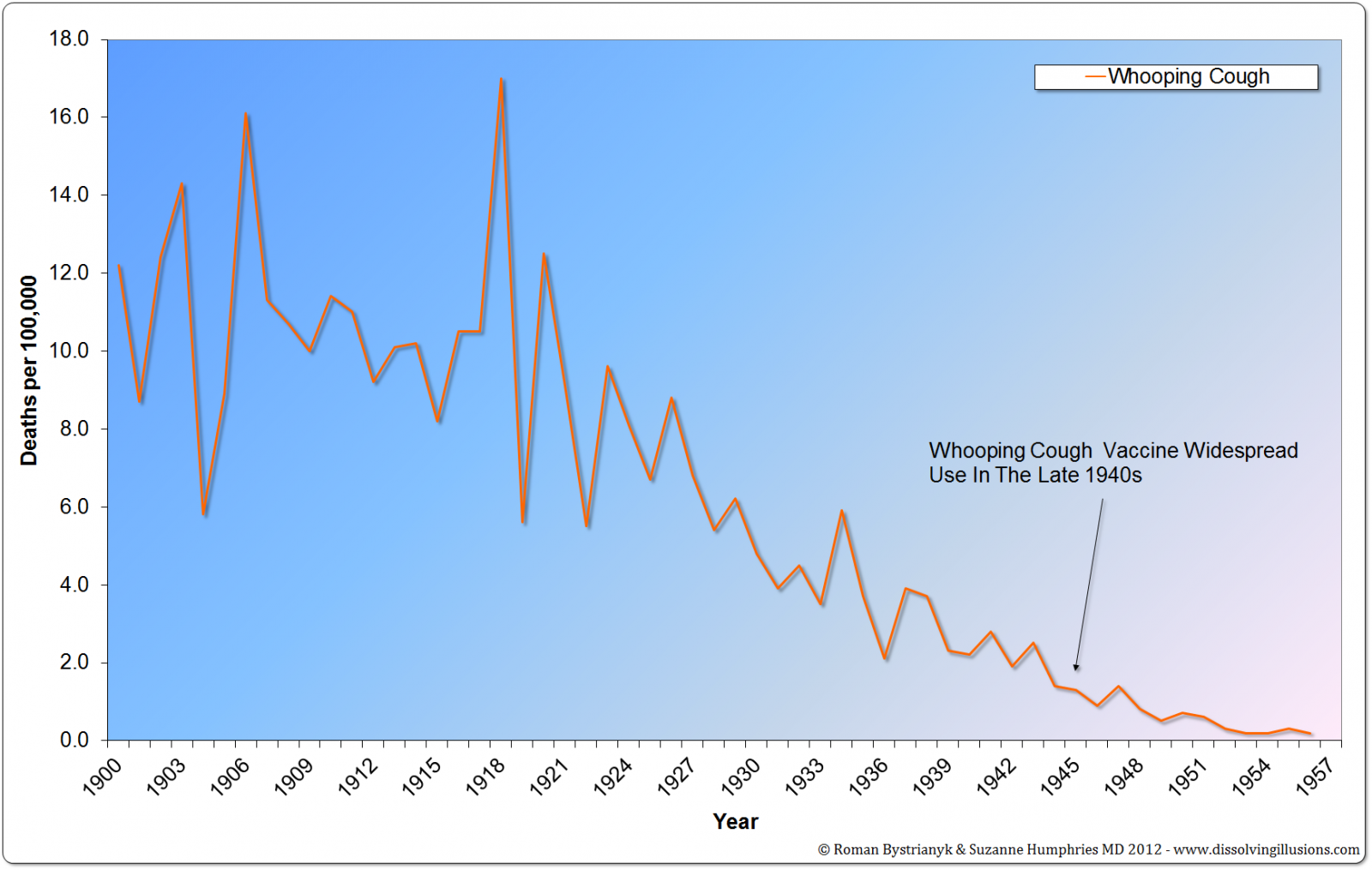 Data from England and Wales showed that mortality from whooping cough had declined by more than 99 percent before the use of the vaccine. [11] 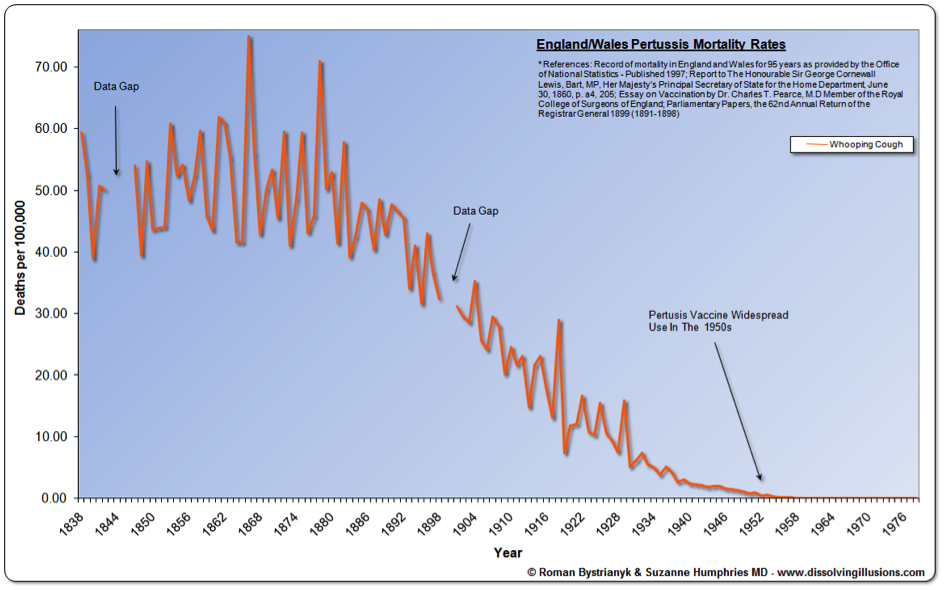 In the years following, doctors began questioning the wisdom and safety of the pertussis vaccination program in major medical journals.

"...it may be questioned whether universal vaccination against pertussis is always justified, especially in view of the increasingly mild nature of the disease and of the very small mortality...An investigation of the incidence of neurological complications after pertussis showed that this was not so high as after vaccination." [7]

"...whooping cough (and measles) are no longer important causes of death or severe illness...I cannot see how it is justifiable to promote mass vaccination of children everywhere against diseases which are generally mild, which confer lasting immunity, and which most children escape or overcome easily without being vaccinated." [8]

"This risk [of neurological damage from the vaccine] far exceeds the present risk of death or permanent damage from whooping-cough or even, in some parts of the country, the chance of contracting it." [9]

The effectiveness of the DPT vaccine was also called into question.

"Immunizing only postpartum mothers with Tdap vaccine did not reduce pertussis illness in infants ≤6 months of age." [28]

"Adolescent and/or adult vaccination seems to be cost-effective, however data from observational studies suggest that this vaccination strategy...does not affect the disease incidence in infants." [34]

During the statewide "epidemic" in California in 2010, the incidence was 20 cases per 100,000. [2]  All 10 deaths reported were in infants <3 months.  Although I do not have access to the infants' records, I presume all received the standard antibiotic treatment, which can prevent communicability [29] but may prolong and increase the severity of the illness. [25]

"Children who received an antibiotic had a duration of cough 6 to 11 days longer and spasmodic cough 4 to 13 days longer than untreated patients."   [25] 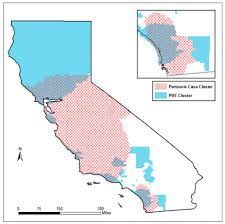 The analysis found an association between clusters of pertussis cases and NMEs, however, the data shows large regions where no association existed.  Keep in mind that specificity of a pertussis infection diagnosis can be poor, with high rates of false-positive results in some laboratories due to factors that include being vaccinated against pertussis. [1]

The authors reference numerous weaknesses in the data including the fact that a NME did not necessarily indicate that the individuals were unvaccinated.

"NME data from California do not contain specific data on which vaccine(s) or dose(s) were not received by a child with a NME, and it is possible that some children with a NME were completely vaccinated against pertussis."  [4]

Furthermore, they acknowledge that they did not know if the confirmed pertussis cases in these clusters were up-to-date on their vaccinations.

"Immunization status of cases was not available for a large enough proportion of the pertussis cases to include this variable in our analysis." [4]

A study published in 2012 in the journal Clinical Infectious Diseases analyzed data from a Kaiser Permanente database in Marin County, California which had the 2nd highest incidence of lab confirmed pertussis in the state at 136 per 100,000. [2]

In a 2012 study published in the Journal of Pediatric Infectious Disease, they looked at the data from San Diego, CA during the 2010 outbreak.

In another 2012 study in the New England Journal of Medicine, the authors state:

"In conclusion, our evaluation of data from a large pertussis outbreak in California [in 2010] showed that protection from disease after a fifth dose of DTaP...was relatively short-lived and waned substantially each year." [10]

These studies found that appropriately vaccinated kids can acquire and spread whooping cough due to primary (no initial protection) or secondary (waning protection) vaccine failure.

"Among 176 confirmed cases of infants with pertussis...77% were age-appropriately vaccinated." [33]

"Despite underreporting, an increased incidence of infant, adolescent and adult pertussis has been observed worldwide since the introduction of widespread vaccination." [32]

The aforementioned study alludes to the fact that the data fails to capture individuals who were infected but were not counted because 1) they were asymptomatic, 2) their lab results showed a false-negative, or 3) they were overlooked by parents and physicians due to mild symptoms and an inflated belief in the protection afforded by the vaccine.

"My data provide good evidence that [whooping cough] never really went away.  What went away was the ability of doctors to recognize it..." [12]

"[T]he circulation of B pertussis is occurring in adolescents and adults and is manifested by prolonged cough illnesses, which most often go unrecognized as pertussis." [13]

"...the shortfall in reported disease was due largely to atypical...or forgotten infections...Secondly, given the varied spectrum of clinical response to B. pertussis infection, it is reasonable to suppose that some attacks will not be recognized as whooping cough." [17]

Carriage and spread of Bordetella bacterium may be more likely in vaccinated populations due to a phenomenon known as original antigenic sin (OAS).  The bacterium secretes adenylate cyclase toxin (ACT) that acts to shield and delay identification and elimination by the host's immune system.  The recognition of ACT on initial and subsequent infection is crucial for the removal of the microorganism from the respiratory tract.  Vaccination has been shown to stimulate minimal antibody response to ACT relative to a natural infection. [14]  This weak ACT antibody response and poor clearance is programmed and repeated on subsequent infection in vaccinated populations leading to OAS.

"Of particular interest is the lack of a significant ACT antibody response in children for whom the DTP or DTaP vaccines failed.  This induced tolerance is intriguing and may be due to the phenomenon called 'original antigenic sin'."[15]

"The lesser protection provided by DTaP....may be due to [OAS], when initial exposure locks in the immune response to certain epitopes and inhibits epitopes on subsequent exposures." [16]

Pertussis vaccines are now being implicated for inducing an evolutionary genetic mutation in the pertussis bacterium.  Australia has reported a sharp increase in whooping cough cases since 2008 predominantly caused by new genotype of B. pertussis. [22]   Researchers have discovered that B. pertussis strains are mutating into more virulent forms in the Netherlands and worldwide.

"Modern B. pertussis strains differed significantly from pre-vaccination strains...Indeed this is exemplified by the rapid emergence of ptxP3 strains with increased toxin production." [20]

"...the dramatic increase in pertussis is temporally associated with B. pertussis strains...which confers increased pertussis toxin (ptx) production. Epidemiologic data suggest that these strains are more virulent in humans." [21]

Animal research is also implicating the vaccine in the rise of B. parapertussis infections and an enhancement of its ability to colonize the lungs potentially enhancing its virulence.

"...a highly significant enhancement of colonization by B. parapertussis was observed in mice vaccinated with acellular vaccines." [24]

The authors of this latest study in Pediatrics conclude:

"Our data suggest a clustering of NMEs may have been 1 of several factors in the 2010 California pertussis resurgence." [4]

I have detailed many of those other factors here and explained why the evidence fails to implicate unvaccinated kids for the recent whooping cough outbreaks but instead points to the vaccine itself.  Some reporters and journalists may base their headlines and content on a brief read of the abstract and a quick search on Wikipedia.  I do not expect them to have my clinical experience but I would hope that, in the future, they do a more complete review of the published, peer-reviewed medical literature in an effort to present a more accurate picture to their audience.

It has been said that the road to hell is paved with good intentions.  The unintended consequences of well-meaning but shortsighted medical interventions and programs litter the dustbin of human history.  In nearly all of the literature that I reference, there were calls for more vaccine coverage.  Do researchers and health officials truly not see the futility of trying to eliminate one microorganism after another with an endless parade of vaccines rather than focusing on optimizing immunity to protect against all pathogens through efforts such as increasing rates of natural childbirth and breast-feeding, improved sanitation, clean water and better nutrition?  In my practice, I've had parents report tremendous success eliminating symptomatic pertussis infections utilizing breast-feeding and/or a high-dose vitamin C protocol.

"Nothing is more dangerous than an idea when it is the only one you have." –Emile Chartier 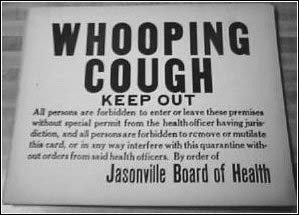