The Hidden Dangers of of Soylent "Meal Replacement"

I DON'T KNOW WHAT'S WORSE: a product full of GMOs and chemically-derived additives that proudly lauds its healthfulness and humanitarian benefits, or, a manufacturer that blatantly hides the fact they are using GMO ingredients by keeping them off the label?

In the case of Soylent, a meal replacement drink made with GMO soy and other genetically-modified ingredients, the makers want you to know how proud they are to use GMOs in their product. Reading like a Monsanto ad, the post on Soylent’s website spouts a litany of pseudo-scientific propaganda about the safety of GMOs that GreenMedInfo has spent the last ten years debunking.

Putting the issue of GMOs to the side for a moment, Soylent’s suitability as a meal replacement still has the insurmountable problem of its use of synthetic chemicals as nutritional additives. Ingredients such as sucralose (aka Splenda), petrochemically-derived vitamin E, and known substances possessing carcinogenicity such as manganese sulfate, chromium chloride, sodium molybdate, and sodium selenite, deliver the “nutrients.” Although these industrial byproducts have been approved for use in both human and animal foods, it is an indefensible position that these toxic compounds fulfill daily nutritional requirements. As GreenMedInfo’s research database shows, the scientific evidence warning against the use of mass-market vitamins, whether in pill or liquid form, is too substantial to ignore.

The Lie of Synthetic Vitamins

According to Rosa Foods, the brand’s manufacturer, “Soylent meets all nutritional requirements for an average adult” and can replace any meal. The nutrition label betrays Soylent’s lack of actual food ingredients, and shows a remarkable similarity to commercial multivitamin supplements that are known to be toxic. Research into mass-market vitamins has shown that these synthetically-derived substitutes deliver none of the nutritional benefits of real food, and can even increase mortality rates and incidences of prostate and gastrointestinal cancer. 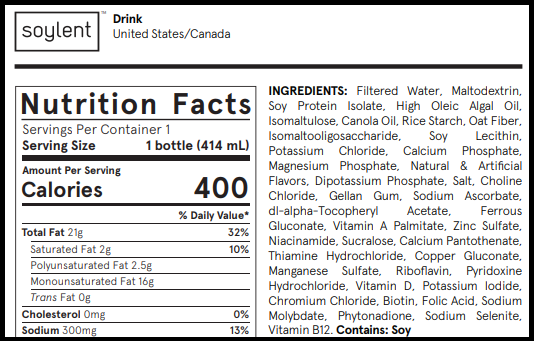 Looking at the specific vitamin and mineral ingredients in Soylent reads like a “Who’s Who” of toxicants to avoid. Manganese sulfate is classified by the EU Index as "Harmful" and "Dangerous for the environment"[1] despite being allowed in meal replacement drinks and even infant formulas. Dl-alpha-tocopheryl acetate, a synthetic and inferior form of vitamin E, conveys little-to-none of the benefits of food-derived vitamin E. Studies show that it aggravates health problems related to smoking, including increased risk of stroke and pneumonia, and may contribute to DNA damage in the liver. Consumption of sodium selenite, the inorganic, toxic form of the trace element selenium, is associated with a sobering list of potential health risks, including fetal abnormalities in animal studies, and the potential to damage DNA and chromosomes. And sucralose, the synthetic sweetener used to wash it all down, has been shown to seriously compromise delicate gut flora, inducing glucose intolerance and contributing to metabolic and thyroid dysfunction, in addition to being cancer-causing.

The fact that Soylent is marketed to consumers as a healthy nutritional option when in reality it conceals a host of horrors, bears an ironic resemblance to how Soylent got its name. Taken from the 1970's film, Soylent Green, Soylent is the name of a healthy food product supposedly made from ocean plankton, that later turns out to be made from human beings. The movie’s popular catchphrase, "Soylent green is people!” was meant to alert the unsuspecting public to the horrific reality of what they were actually consuming. In a world where truth is stranger than fiction, we at GreenMedInfo are sharing this article with the same intent. Ironically, Soylent’s intellectually unsophisticated pro-gmo stance is actually (true to its brand name's origins) pro-cannabalism: "Biotech's Dark Promise: Involuntary Cannibalism for All."

Marketed to young, ecologically-minded consumers, Soylent is positioned as a plant-based, 'low-carbon' footprint alternative to animal foods, and a healthier convenience option than “microwave burritos.” Because “food wastes more than just your time,” Soylent’s year-long shelf life is touted as a profound benefit over “throwing away” costly fruits and vegetables because, who has time for eating? Soylent doesn’t require refrigeration, and you don’t even have to stop what you’re doing to consume it. Is this really the nutritional breakthrough we’ve been searching for?

In yet another parallel to the horror film, which explored a futuristic world where climate change and overpopulation create a food shortage, the makers of Soylent espouse to be creating a better world through easy access to “complete nutrition.” By taking eating “off your plate” and simultaneously reducing the carbon emissions associated with industrial animal farming, Soylent claims to be addressing the problem of feeding the planet in a time when, in their view, growing enough real food has become economically and ecologically unviable. We’ve already debunked Soylent’s nutritional claim that synthetic vitamins can take the place of real, organic food. Now, let’s unpack their claims regarding the environmental superiority of Soylent’s namesake ingredient: GMO soy.

The Harsh Reality of GMOs

Despite more than twenty years of claims by the federal government that GMOs are safe for human consumption, the food-buying public has never swallowed the bait. Consumers worldwide have demanded honest labeling laws, much to the consternation of the Big Agra lobby, who have argued that GMOs are “substantially equivalent” to their organic counterparts and therefore require no such disclosures. Monsanto has even gone to great lengths to hide its GMO products from consumers. And while most mainstream media outlets continue to seed the belief that GMOs have been proven safe in a trillion studies, there is good reason to suspect financial and political motivations behind the pro-GMO party line. Agribusiness lobbyists and chemical manufacturers like Monsanto pour hundreds of millions of dollars into American politics every year,[2] proposing legislation to enact laws in their favor. They draft press releases and write speeches for scientists to deliver on the wonders of GMO food production, meanwhile, the science tells a different story.

A study published in December 2016 in the peer-reviewed journal Scientific Reports exposed the genetic differences in a strain of Roundup-tolerant corn called NK603 (doesn’t it make your mouth water?!).[3] According to the report, “Analysis found over 150 different proteins whose levels were different between the GMO NK603 and its non-GMO counterpart. More than 50 small molecule metabolites were also significantly different in their amounts.” These changes in gene expression, specifically proteins and glutathione—an important antioxidant—were indicative of increased oxidative stress in the plant. This led researchers to conclude that the GMO corn was not substantially equivalent to non-GMO corn, a finding that has been matched by multiple studies on glyphosate-tolerant soybeans,[4],[5],[6] along with other GMO crops. Meanwhile, the toxic effects of glyphosate, aka Roundup, continue to be exposed, not the least of which is that exceedingly low concentrations of it, even within the infinitesmal parts per trillion range, exhibit carcinogenic, endocrine-disruptive properties -- disproving that 'the dose makes the poison.'

A second study from late-2016 revealed that mice exposed to glyphosate “at environmentally relevant levels” developed non-alcoholic fatty liver disease, a chronic condition that affects up to 40% of Americans, and up to 90% of obese individuals.[7] NAFLD, if left untreated, is often a precursor to adult-onset diabetes, and increased risks for cardiovascular disease and liver cancer. Perhaps the most shocking revelation in this study was that the threshold of glyphosate exposure, those “environmentally relevant levels,” were thousands of times lower than currently allowable limits set by governmental standards. Repeated exposure to an ultra-low dose of Roundup herbicide was enough to effect NAFLD in the mice in this study.[8] Chronic, low-dose exposure, such as the kind we get when we consume multiple servings of glyphosate-spliced GMO foods each day?

The myth of the “environmentally friendly” GMO crop has feeble roots. While it’s true that some farmers require less pesticide spray when raising GMO crops, it’s because the pesticide is already IN the crop! This defense is like playing a shell game, designed to make you lose sight of the prize—and human digestive systems pay the price.

In the case of soybeans, the key ingredient in Soylent, the claims of environmental advantages due to less toxic farming practices are patently false. In the largest-ever study on the environmental impacts of genetically modified crops, researchers from the University of Virginia determined that “widespread adoption of genetically modified crops has...increased the use of weed-killing herbicides as weeds become more resistant.” Soybeans are among the worst offenders. With data gathered from more than 5,000 soybean farmers between 1998-2011, soybean crops saw a significant increase in herbicide use, with GMO crops using 28% more herbicides than non-GMO crops.[9] Researchers determined that “continued growth in herbicide use poses a significant environmental problem,” and the adoption of GMO soybeans correlated with a negative impact on the environment due to increased contamination of local ecosystems (air and water).

Glyphosate contamination is affecting groundwater all over the agricultural world, and is so prevalent in the United States that it was found in 60-100% of air and water samples taken in this 2011 study. This is a far cry from the healthful, low-impact farming practices that Soylent’s manufacturers are touting. In addition to the negative environmental impact, GMO soybeans themselves bear the inevitable scars of genetic manipulation. GreenMedInfo previously reported on a July 2015 study that showed the process of genetically-modifying soybeans creates so much stress within the plant that it causes a build-up of cancer-causing formaldehyde. Bt toxin, the same one built into Monsanto's GMO soy crops, is a biopesticide that is known to be highly toxic and potentially deadly at levels above 270 milligrams per kilogram. Further condemnation of the crop comes via a 2013 study which showed that Bt toxin is cytotoxic, or deadly to cells, particularly to mammalian red blood cells.

When a singular product claims to be a suitable replacement for real food, warning flags should start waving wildly. When that same product has key ingredients that are toxic for the human body, as well as bad for the environment, is there any need to field-test it for yourself? Soylent, like the film that inspired its name, is a frightening harbinger of what could come if we decide to outsource personal health and food integrity to big corporations. Also, please keep abreast of the new save of GMOs based on RNA interference technology that could be even more devastating to the health and well being of both humans and the planet by reading: The GMO Agenda Takes a Menacing Leap Forward with EPA’s Silent.

For additional research on the dangerous chemicals mentioned in this article, visit the GreenMedInfo Toxic Ingredient database. 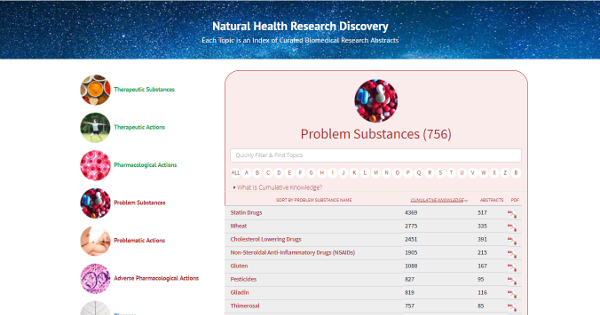