Views 5905
Posted on:
Wednesday, October 10th 2012 at 5:00 am
Written By:
Anne Gordon, RN
This article is copyrighted by GreenMedInfo LLC, 2012
Visit our Re-post guidelines 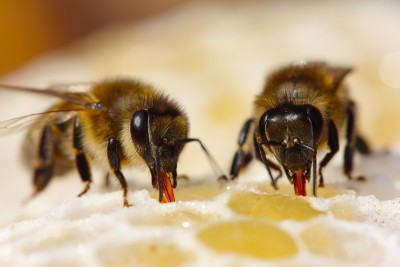 Sounds like a science fiction horror story, but it is what is happening. Today, I heard about Zombie Bees being found now in Washington State, and a new swarm sighted in British Columbia. What?

It is thought these bees are infected with a parasitic fly causing them to erratically fly at night until death. An adult fly infects the bees by injecting eggs into the bee's body. The bee is eaten from the inside as the maggots hatch. Zombie bees have been confirmed in Oregon, Washington state, California, South Dakota, British Columbia, and were first discovered in 2008.1  There's even a website called Zombeewatch.org.

The 'colony collapse disorder' that is also killing bees might be related, but it is not known yet. Bees are vital for pollination, and sustainable agriculture. It is thought that pesticides might play a role in the declining bee population.2 According to Steve Sheppard, Washington State University chairman of the entomology department, his research has shown that chemical accumulation shortens the insect's lives. Pesticides once again may be creating more damage than intended.

Forests are dying, and people calmly point their finger to the bark beetle pests taking down forests in the US and Canada. An infestation of 750 million acres. Also responsible, is the Spruce beetle, the Fir Engraver, and the list goes on. Sure, there are cycles in nature with insects and diseases. And, true, the effects of climate change, or introduction of invasive species, are possibly shifting the balance.

But, where is the voice of alarm? How about the dead fish, dead birds, and the mutating shrimp? People just nod and say, 'die off's' or, climate change. Could there be a relationship between these strange mutations and ecological imbalances caused by over use of pesticides, or terminator seeds?

What will it take to awaken out of our collective trance, to see and make healthy changes?  Is the constant need for entertainment and digital networking blinding us? As we take a closer look at the trees, and the smaller unspoken voices that are screaming in silence as they mutate, or die, we can see a trend. Even microorganisms are shifting. Our medications are not working as predicted, and a new truth is growing.

Perhaps there is a feeling of helplessness, or of denial. But, people, can work together to affect change. At one time, it was thought that lead was safe, but people who researched banded together to stop its ubiquitous use. Many vaccines have been altered due to mercury within them (used as a preservative), when people became aware of injected potential health problems resulting from the jabs.

Today, we may be poisoned through massive amounts of toxic chemicals, in the air, water, and some engineered foods,  thus not getting the required nutrition. A lot of organic food gets irradiated, after traveling thousands of miles, (do you think nutritional integrity could be affected)?

Are your loved ones victims of a new 'normal' of obesity, allergies, or autoimmune disease?  Are we the new zombies, behaving erratically, sightless victims of our environment? Lets hope not. There's a lot to learn and do if we are to create a healthy place on earth.