Total BPA was detected in 93 % of this healthy infant population aged 3-15 months who are without known environmental exposure to BPA.Dec 04, 2012

"Urinary bisphenol A concentrations and their implications for human exposure in several Asian countries."Aug 15, 2011

Bisphenol A acts as an endocrine disruptor in relation to serum thyroid and reproductive hormone levels in men from an infertility clinic. Feb 15, 2010

Bisphenol A in 24 h urine and plasma samples of the German Environmental Specimen Bank from 1995 to 2009: A retrospective exposure evaluation.Oct 31, 2012

BPA might increase the risk of breast cancer incidence.Sep 15, 2021

Concentrations of Bisphenol A and Seven Other Phenols in Pooled Sera from 3-11 Year Old Children: 2001-2002 National Health and Nutrition Examination Survey.Nov 04, 2012

Internal body concentrations of endocrine disrupting chemicals are associated with an increased risk of subfertility together with alterations in hormone levels.Aug 16, 2015

Thermal receipt paper is a potential source of occupational exposure to BPA, BPS, and BPSIP.Aug 24, 2015

This study found that in humans miR-146a was significant over-expressed and correlated significantly with BPA accumulation in the placenta.Dec 31, 2014

A new chapter in the bisphenol A story: bisphenol S and bisphenol F are not safe alternatives to this compound.Dec 31, 2014

BPA exposure perturbs the insulin signaling and glucose transport in the brain, therefore, it might be a risk factor for brain insulin resistance.Jan 31, 2015

BPA promotes antiproliferative effects during the neonatal development of the gerbil prostate.Oct 30, 2015

Concentrations and Profiles of Bisphenol A and Other Bisphenol Analogues in Foodstuffs from the United States and their Implications for Human Exposure.Apr 23, 2013

Developmental BPA exposure modifies Fkbp5 methylation and expression in male rats, which may be related to its impact on stress responsiveness.Sep 27, 2015

Evidence suggests a link between male BPA exposure and disruption of cardiogenesis in forthcoming generations.Aug 26, 2015

Maternal dietary supplementation with methyl donors like folic acid or the phytoestrogen genistein, negated the DNA hypomethylating effect of Bisphenol A - Article 2Aug 07, 2007

Quercetin may be a potential therapeutic against BPA induced testicular toxicity.Jan 18, 2016

The brain barrier systems does not limit the access of the lipophilic BPA to the brain. May 31, 2004

The present study demonstrates the hepato-protective and reno-protective effects of oleuropein and hydroxytyrosol olive leaves extracts from BPA and its derivates toxicity.May 07, 2015

The probiotics Bifidobacterium breve and Lactobacillus casei reduce the intestinal absorption of bisphenol A by facillitating its excretion. Jun 01, 2008

The upregulation of ribosome-associated genes and the impairment of testis-specific gene expression are significantly enhanced upon BPA exposure with a high-sugar diet. Apr 30, 2014

These original results are consistent with many epidemiological studies reporting on a link between BPA exposure and the onset of cardiovascular diseases.Nov 04, 2014

These results suggest that the prostate of female gerbils were more susceptible to the intrauterine BPA effects, since they became more proliferative in adult life.Oct 06, 2015

Thymoquinone attenuates toxicity and oxidative stress induced by bisphenol A in liver of male rats.Oct 31, 2014

Triclosan exacerbates the presence of bisphenol A in tissues of female and male mice.Jul 14, 2014

Tualang honey has a potential role in reducing BPA-induced ovarian toxicity by reducing the morphological abnormalities of the ovarian follicles.Dec 31, 2013

Tualang honey has potential roles in protecting the uterus from BPA-induced toxicity.Dec 31, 2014

"Genistein, a soy phytoestrogen, prevents the growth of BG-1 ovarian cancer cells induced by 17β-estradiol or bisphenol A via the inhibition of cell cycle progression."Nov 28, 2012

"The politics of plastics: the making and unmaking of bisphenol a"safety"."Oct 31, 2009

"Weak estrogenic transcriptional activities of Bisphenol A and Bisphenol S."Aug 01, 2012

A probiotic bacteria found within kimchi known as Bacillus pumilus is capable of degrading bisphenol A. Jan 01, 2007

Bisphenol A can promote the migration of ER-breast cancer cells through down regulation of FOXA1.Sep 08, 2015

Bisphenol A in dental sealants and its estrogen like effect.May 01, 2012

Bisphenol S has been shown to have estrogenic activity. Aug 01, 2001

Both BPA and BPS could be involved in obesity and steatosis processes, but through two different metabolic pathways.Oct 14, 2014

BPA exposure might have long-lasting consequences on the female reproductive health, ranging from reduced fertility to offspring defects.Dec 31, 2014

Emerging science indicates that deleterious immunologic changes, including increased propensity to develop wheeze, allergy, and asthma after dietary and inhalation exposure to these chemicals.Sep 03, 2015

High levels of bisphenol A are found in all world paper currencies tested and are a probably source of exposure.Jul 11, 2011

Nanomolar BPA can trigger the proliferation of breast cancer cells via ERK1/2/ERRγ signals.Sep 08, 2015

Royal jelly inhibits the estrogenic and proliferative effect of Bisphenol-A.Jan 01, 2007 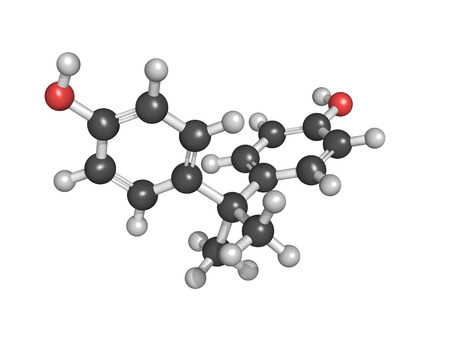 Research: Bisphenol A (BPA) Causes 100x More Harm Than Previously Imagined
Written by Sayer Ji, Founder
A new study reveals just how profoundly misled we are about Bisphenol A and its analogs: they are at least 100x more toxic than we previously imagined.

Human Hormones are Being Eclipsed by Synthetic Chemicals
Written by Sayer Ji, Founder
A new study published in the Journal of Applied Toxicology has raised some disturbing possibilities regarding the dangers of a common preservative found in thousands of consumer products on the market today.

Research Confirms Sweating Detoxifies Dangerous Metals, Petrochemicals
Written by Sayer Ji, Founder
New research is revealing something remarkable about why the body sweats. Beyond its obvious role in regulating body temperature, sweating has been found to facilitate the bodily elimination of accumulated heavy metals and petrochemicals, indicating that if we want to be healthy we should put regular effort into doing more sweating.

What Food Manufacturers Don’t Want You To Know: The Pantry Principle
Written by Helayne Waldman
Packaged food eaters beware: here's a hint of just a scant few of the items that lurk beneath the label in your packaged food products. And for those who are trying to get your friends and family off of packaged foods and on to a whole foods lifestyle, here's some more ammunition!
Nasty Pesticide Broken Down by Probiotic Used In Culturing Food
Written by Sayer Ji, Founder
Cultured food has a wide range of health benefits, but recent research shows it may also degrade highly toxic pesticide residues found in our food.

Here's How Much Plastic You're Eating Each Week
Written by GreenMedInfo Research Group
You're likely already aware that global plastic pollution has reached an all-time high, but did you know you're eating it, too? Research concludes that, on average, you're consuming a credit card's worth of plastic each week

8 Ways Microbes Can Save Us From Ourselves
Written by Sayer Ji, Founder
Could bacteria and related microbes, widely believed to be a primary cause of disease, explain how we are capable of surviving through the self-created chemical nightmare of industrialized society?

Probiotics Destroy Toxic Chemicals in our Gut for Us
Written by Sayer Ji, Founder
It is an awesome fact of nature that we have trillions of organisms within our body – containing completely foreign DNA -- some of which break down toxic chemicals that we humans have created to kill other things, but are now killing us, e.g. pesticides. Who are these strange helpers?

Corporations Replace BPA with More DNA-Damaging Bisphenols
Written by Sayer Ji, Founder
Just when you thought it was safe to buy "BPA-free" products, manufacturers flood the marketplace with an alphabet soup of toxic bisphenols.

Chemical Deception: Multiple Forms of Hormone-Disrupting Bisphenol Found In US Food Supply
Written by Sayer Ji, Founder
You know about the dangers of Bisphenol A (BPA), and hopefully Bisphenol S (BPS), but did you know that there are at least 8 toxic bisphenols in our food supply, with 75% of food samples from the US tested showing significant levels of these ubiquitous poisons?

5 Surprisingly Simple Ways to Detoxify
Written by Sayer Ji, Founder
Given what we are now exposed to through our food, air, and water, detoxification has become a modern-day necessity. Without the daily activation of ancient, effective physiological pathways designed to remove environmental toxins, we are bound to get sick. So, what are some simple, effective ways we rid our body of its daily toxic burden?