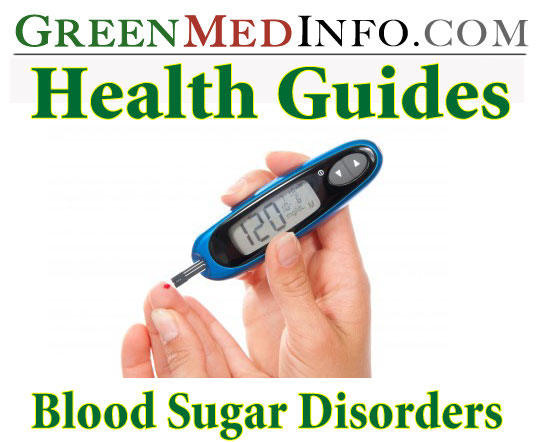 This section collates research and information relevant to blood sugar disorders such as type 1 and type 2 diabetes. It is designed to provide our users with the first-hand research on conventional medical interventions and possible natural alternatives, without which an informed choice is not possible.

Splenda (Sucralose) Found To Have Diabetes-Promoting Effects
Written by Sayer Ji, Founder
Promoted for decades as a "safe" sugar alternative, presumably to prevent or reduce symptoms of diabetes, Splenda (sucralose) has been found to have diabetes-promoting effects in human subjects.

10 Natural Substances for Type 1 Diabetes
Written by Sayer Ji, Founder
Could long sought-after support for type 1 diabetes be as close as your kitchen cupboard? An accumulating body of scientific research appears to point in exactly that direction

Insulin Doubles Death Rate in Type 2 Diabetics: Study
Written by Heidi Stevenson
A new study clearly documents that the standard treatment for type 2 diabetes is a killer, resulting in more than double the deaths. The treatment justification has always been based on irrelevant criteria - just as it is with most pharmaceutical treatments.

Diabetes: An Entirely Preventable & Reversible Condition
Written by Sayer Ji, Founder
While geneticists apply vast amounts of time, energy and money to finding the "causes" of disease in our genes, much less attention is placed on research that has already demonstrated the triggers of autoimmunity such as infections, vaccines, pesticide and petroleum exposure (diesel fuel particles) and the consumption of foods like wheat, cow's dairy and soy (unfermented, GMO and/or excessive) are the major contributing factors in the development of type 1 diabetes.

The Sitting Sickness: Is It Silently Killing You?
Written by Nathan Daley, MD, MPH
If you've heard that life is movement, it's true. If you've heard that just sitting around can kill you, it's also true. Physical inactivity is the fourth leading cause of death worldwide!

An MD's Perspective On How To Avoid, Treat And Reverse Diabetes
Written by Dr. Russell M. Jaffe, MD, PhD
Of all the illnesses in industrial society, diabetes takes the greatest toll. Over 100,000 people die from complications of diabetes each year. Another million lose quality of life due to metabolic syndrome. Diabetes adds $135 billion to the annual cost of healthcare in the U.S.1 Yet diabetes remains avoidable, treatable, and reversible.