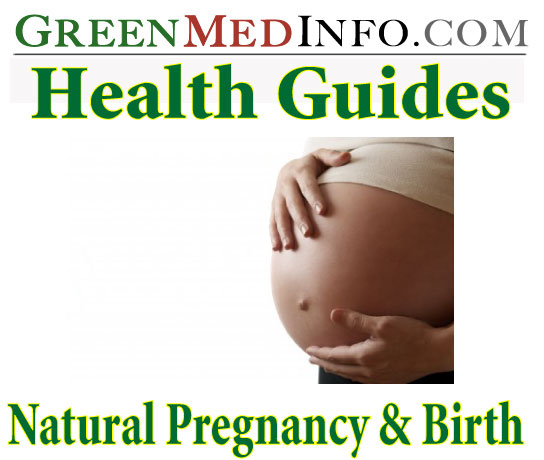 The information provided below is offered in support of those interested in promoting, assisting or having a natural childbirth. Some of the research is relevant to those who have not been able to conceive or birth naturally, but wish to employ natural modalities.

Protective effect of fisetin on the lipopolysaccharide-induced preeclampsia.

Why Is Pesticide Used As An Ingredient In Infant Formula?
Written by Sayer Ji, Founder
Why is cupric sulfate - a known herbicide, fungicide and pesticide - being used in infant formula? And why is it displayed proudly on product labels as a presumably nutritious ingredient? Used to kill fungus, aquatic plants and roots of plants, parasitic infections in aquarium fish and snails, as well as algae and bacteria such as Escherichia coli, cupric sulfate hardly sounds fit for human consumption, much less for infants. Indeed, infants are all too often looked at as...

The Myth of A Safer Hospital Birth for Low Risk Pregnancies
Written by Judy Slome Cohain, CNM
Today research wrongly considers hospital birth as the gold standard. Bias towards hospital births causes the majority of researchers to ignore the fact that women could achieve even better outcomes than hospital birth, at planned attended homebirth.

The Surprising Lack of Evidence For Postdate Birth Induction
Written by Judy Slome Cohain, CNM
45% of births in the US are now induced, but evidence supporting this intervention is severely lacking. Case controlled studies show no benefit to inducing for postdates. Routinely inducing for postdates is based on 3 uncontrolled, retrospective studies showing 1/1000 less stillbirths while ignoring possible increases in brain damage to newborns as a result of induction.

Why so Many Women are Taking the Epidural Trip
Written by Judy Slome Cohain, CNM
Two million American women will take an epidural trip this year during childbirth. In most cases, they'll be ill–informed as to possible side effects or alternate methods of pain relief. In many ways, epidurals are the drug trip of the current generation. Similar to street drug pushers, most anesthesiologists in the delivery rooms maintain a low profile, avoid making eye contact and threaten to walk out if they don't get total cooperation

Baby Gives Back: The Fetus Is Capable of Saving Mom's Life
Written by Sayer Ji, Founder
It appears that Nature made it possible for the unborn offspring of mammals to save their mother's lives by contributing stem cells which are capable of grafting into tissues such as bone marrow, providing a lifelong source of new healthy cells to replace damaged or dysfunctional ones.

Home Birth Safer Than Hospital Birth: Nation-Wide Study
Written by Heidi Stevenson
Yet another study, this one consisting of every birth in The Netherlands over two years, demonstrates that home births are safer than hospital births. Women are more than twice as likely to end up in intensive care if they give birth in a hospital! Nonetheless, birth has been medicalized, resulting in enormous harm to both mothers and babies.

GMO Toxins Are in Nearly All Pregnant Women & Fetuses
Written by Heidi Stevenson
The GMO mass experiment on the public is producing results—terrifying ones. GM toxic elements can be found in nearly all pregnant women and children. (Update of the article featured in Genetic Roulette movie

Chemicals As "Nutrients" In "USDA Organic" Infant Formula
Written by Sayer Ji, Founder
Advertised as "produced without potentially harmful pesticides," this "Organic" Infant Formula actually contains chemicals used as pesticides and which it lists on its label as a "nutritional" ingredient. And this is just the tip of the toxicological iceberg -- a case of "organic-washing" at its worst!