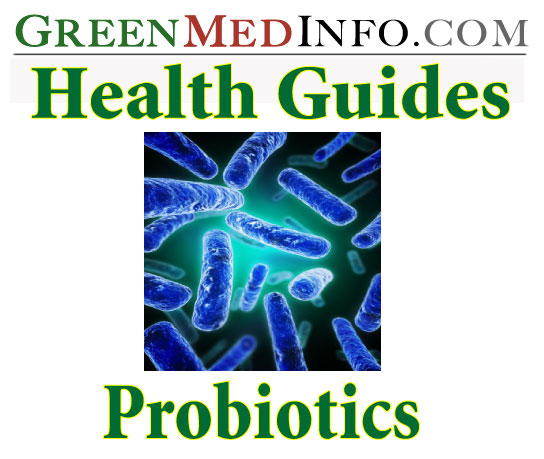 This section collates research and articles relevant to probiotics and fermented foods. Below you find hundreds of studies, many of which are strain specific, on the potential value of probiotics and cultured foods in the prevention and treatment of a wide range of health conditions (close to 200 diseases and/or disease symptoms).

Bioactive compounds from kefir and their potential benefits on health.

Probiotics Destroy Toxic Chemicals in our Gut for Us
Written by Sayer Ji, Founder
It is an awesome fact of nature that we have trillions of organisms within our body – containing completely foreign DNA -- some of which break down toxic chemicals that we humans have created to kill other things, but are now killing us, e.g. pesticides. Who are these strange helpers?

From Autism to Anorexia, It's All About the Gut
Written by Margie King, Health Coach
Whether you suffer with a chronic illness, psychiatric disorder or psychological condition, the first thing to check is your belly. That's because “All diseases begin in the gut,” according to the GAPS Diet creator Dr. Natasha Campbell-McBride, M.D.

Why You Should Ditch Sugar In Favor of Honey
Written by Sayer Ji, Founder
Increasingly, it is hard to find honey being used in foods or as a sweetener. Instead, sugar and corn-derived high fructose corn syrup has displaced it. But honey is vastly different than sugar.

The Amazing Healing Properties of Fermented Foods
Written by Sayer Ji, Founder
Between the hard and fast dichotomies of cooked and raw, dead and alive, is this beautiful thing called fermented...

Will Monsanto's Weedkiller Destroy Raw & Fermented Milk?
Written by Sayer Ji, Founder
New research indicates that the microbial biodiversity of the soil and our food is being dramatically impacted by the use of herbicides like glyphosate, the active ingredient in Monsanto’s Roundup weedkiller. Researchers have proposed that many soil organisms, which are indispensable for the productivity of the soil in agriculture, as well as in raw and fermented dairy production, may be undergoing endangerment, if not also in some cases extinction in certain geographic regions of the world.

Probiotics and Mitochondria: Bacteria Are Not "Other"
Written by Sayer Ji, Founder
Ultimately, our bodies tell a very different story of our origins and need for cooperation with other cellular communities (i.e. probiotics) than the human ego, and its various anthropocentric explanations of who we are and where we came from

Psychobiotics: Bacteria for Your Brain?
Written by Kelly Brogan, M.D.
Every functional medicine psychiatrist has case stories of the 'probiotic cure' – of a patient whose debilitating symptoms remitted completely with dietary change and probiotic supplementation

Probiotics: Essential Supplements or Waste of Money?
Written by Graham Ryan
Do probiotic supplements really work? What does the peer-reviewed research reveal?
Primal Bugs: The Amazing Hunter Gatherer Microbiome
Written by Kelly Brogan, M.D.
For 95% of our evolutionary history, we were hunter-gatherers. What was our microbial-host relationship like for the duration of that experience? A new study on the Hadza people finally sheds light on this fascinating topic.