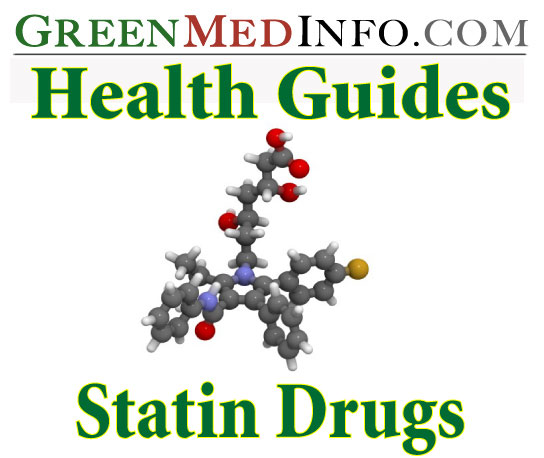 This section collates research and information on the unintended adverse effects of statin drugs. It is designed to provide our users with the first-hand research, without which an informed choice is not possible.

A New Greek Name for Statin Toxicity: Polymyalgia Rheumatica
Written by Sayer Ji, Founder
Over 30 billion dollars worth of this drug is sold annually and yet it may be benefiting no one. In fact, there are over 300 adverse effects associated with its use, not the least of which is the weakening of the heart muscle. In order to cover-up the symptoms of statin-induced muscle damage new "diseases" have been coined, including polymyalgia rheumatica.

New Documentary Exposes the Over-Prescription of Statins
Written by Justin Smith
An estimated 40 million people take a statin to lower their cholesterol levels. These are one of the most widely prescribed medications in history and, of course, one of the most profitable.

Statins Raise Diabetes Risk by 48% for Postmenopausal Women
Written by Margie King, Health Coach
More and more women are being prescribed cholesterol-lowering statins and some doctors are even recommending the drugs be added to the water supply or dispensed at the McDonald’s drive-thru windows. However, postmenopausal women using statins may be increasing their risk of diabetes according to a study published by the Archives of Internal Medicine.

Blind to the Truth: The Eye-Damaging Effects of Statins
Written by Sayer Ji, Founder
How long will it take medical doctors and their patients to see the truth? Will it take being physically blinded before they arrive at this awareness? Eye-associated adverse effects, including loss of vision, may be the tipping point when it comes to recognizing the profound range of damaging health effects associated with statin drug use

Confirmed Once Again: Statins Likely Harm The Heart
Written by Sayer Ji, Founder
New research published in the journal PLoS indicates that the use of the cholesterol-lowing class of drugs known as statins is associated with an increased prevalence of microalbuminuria, a well-known marker of vascular dysfunction, affecting both cardiovascular and kidney disease risk.

Statin Drugs Linked To Worsening Osteoarthritis Of The Knee
Written by Sayer Ji, Founder
New research flies in the face of a new theory that statin drugs, used to lower cholesterol, may be of value in those suffering from osteoarthritis. To the contrary, statin drugs are likely contributing to the epidemic of knee osteoarthritis in exposed populations.
Ancient Medical Miracle Rediscovered by Modern Science - Laurus Nobilis
Written by Sinfully Wholesome
Modern science puts and an ancient medical miracle under the microscope and verifies the ancient wisdom of Natural Healthcare Practitioners in the process.
Argan Oil: A Moisturizer So Pure You Could Drink It
Written by Sinfully Wholesome
Argan Oil, is a mosturizer so pure you can drink it. And there is a considerable body of research indicating at least 10 reasons why it should be considered a medicinal food.

Cholesterol Drugs Linked To Eye Damage, JAMA Study Confirms Anew
Written by Sayer Ji, Founder
Statins are taken by millions of people worldwide, but most are unaware that their use has been linked to worsening eye health, along with over 300 adverse health effects.

70 Million Americans Set to Take a Statin and the Flawed 'Evidence'
Written by Justin Smith
Marking the beginning of another dark chapter in the history of medicine, The American National Heart, Lung, and Blood Institute (NHLBI), via the American Heart Association and the American College of Cardiology have just announced a radical change to the way that statins will now be prescribed.