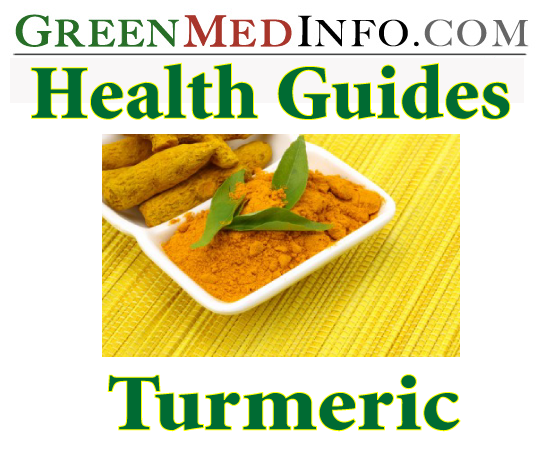 The GreenMedInfo Turmeric Health Guide centralizes all our relevant first-hand biomedical research on turmeric's therapeutic properties, as well as brings together in one spot all our in-depth articles and analyses of this herb's remarkable health benefits.

The results of this research suggest that natural extracts of E. cardamomum and C. longa possess anti-inflammatory effects.

Science Confirms Turmeric As Effective As 14 Drugs
Written by Sayer Ji, Founder
If ever there were an herb that puts existential fear into the bottom line of pharmaceutical companies, its turmeric. Here are a few thousand reasons why...

Turmeric Produces 'Remarkable' Recovery in Alzheimer's Patients
Written by Sayer Ji, Founder
Turmeric has been used in India for over 5,000 years, which is likely why still today both rural and urban populations have some of the lowest prevalence rates of Alzheimer's disease (AD) in the world. A study on patients with AD found that less than a gram of turmeric daily, taken for three months, resulted in 'remarkable improvements'

5 Food-Medicines That Could Quite Possibly Save Your Life
Written by Sayer Ji, Founder
Some of the most powerful medicines on the planet are masquerading around as foods and spices. While they do not lend themselves to being patented, nor will multi-billion dollar human clinical trials ever be funded to prove them efficacious, they have been used since time immemorial to both nourish our bodies, and to prevent and treat disease

500 Reasons Turmeric May Be the World's Most Important Herb
Written by Sayer Ji, Founder
There is a medicinal spice so timelessly interwoven with the origins of human culture and metabolism, so thoroughly supported by modern scientific inquiry, as to be unparalleled in its proven value to human health and well-being

600 Reasons Turmeric May Be the World's Most Important Herb
Written by Sayer Ji, Founder
There is a medicinal spice so timelessly interwoven with the origins of human culture and metabolism, so thoroughly supported by modern scientific inquiry, as to be unparalleled in its proven value to human health and well-being

Why the Law Forbids the Medicinal Use of Natural Substances
Written by Sayer Ji, Founder
According to the FDA's legal definition, a drug is anything that "diagnoses, cures, mitigates, treats, or prevents a disease."

Turmeric's Healing Power: A Physical Manifestation of Compassion?
Written by Sayer Ji, Founder
Few, if any, plants have been revered as thoroughly -- by the religious and scientific community alike -- as a healer of the human body, mind and soul, as beautiful turmeric

Turmeric Superior to Chemical Mouthwash In Improving Oral Health
Written by Sayer Ji, Founder
Since ancient times, turmeric has been used for remedying oral ailments, among other therapeutic applications too numerous to count. Now, new research indicates this amazing spice is superior to chemical mouthwash in killing gingivitis associated bacteria.

Household Spice Protects Against Radiation Treatment's Horrible Effects
Written by Sayer Ji, Founder
The humble spice, in doses available for pennies a day, has been found to reduce one of the most devastating side effects of radiation treatment for head and neck cancer.

Turmeric: A Wellness Promoting Tonic At Low Doses, Research Reveals
Written by Sayer Ji, Founder
Turmeric has legendary status as a disease-fighting agent, but did you know that when administered in low doses to already healthy adults it significantly improves their wellness?