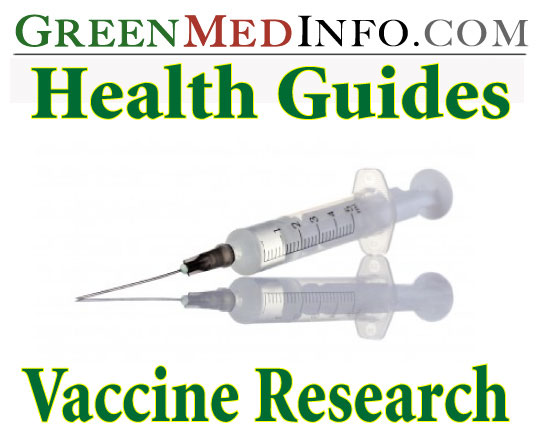 Greenmedinfo.com provides the public with an alternative medical and toxicological resource for ascertaining the true risks and/or unintended consequences of conventional medical interventions such as vaccinations.

Diallyl disulfide may be a potential therapeutic candidate for the treatment of rheumatoid arthritis.

The Shocking Lack of Evidence Supporting Flu Vaccines
Written by Sayer Ji, Founder
With the flu season hysteria nearing its peak, millions are being driven to vaccination as a 'preventive' approach. Those who abstain are often accused of being uneducated or worse, socially irresponsible "anti-vaxxers." Nothing could be further from the truth.

Hep B Vaccine Damages the Liver it is Supposed to Protect
Written by Sayer Ji, Founder
Startling research published in the journal Apoptosis indicates that hepatitis B vaccine, which is designed to prevent Hepatitis B virus-induced damage to the liver, actually causes liver cell destruction

Smoke, Mirrors, and the 'Disappearance' of Polio
Written by Suzanne Humphries, MD
Unbeknownst to most doctors, the polio-vaccine history involves a massive public health service makeover during an era when a live, deadly strain of poliovirus infected the Salk polio vaccines, and paralyzed hundreds of children and their contacts. These were the vaccines that were supposedly responsible for the decline in polio from 1955 to 1961! But there is a more sinister reason for the “decline” in polio during those years; in 1955, a very creative re-definition of poliovirus infections wa

Scientists Point Out Corruption in Vaccine's Promotion
Written by Heidi Stevenson
Using Merck's Gardasil vaccine as a case in point, an investigation documents Big Pharma's near-total control of governmental health agency decisions and the utter lack of concern by the decision makers. However, some scientists are speaking out, and here’s what they have to say.

Vaccine Exemptions: Do They Really Put Others at Risk?
Written by Alan Phillips, J.D.
Parents who exercise a vaccine exemption for their children are often ridiculed for putting their own children and others at risk. However, legally and medically, unvaccinated children do not pose a significant health risk to themselves or anyone else. Alternative vaccine views support this assertion, but the reasoning in this article comes straight from mainstream vaccine beliefs, accepted medical practice and current law