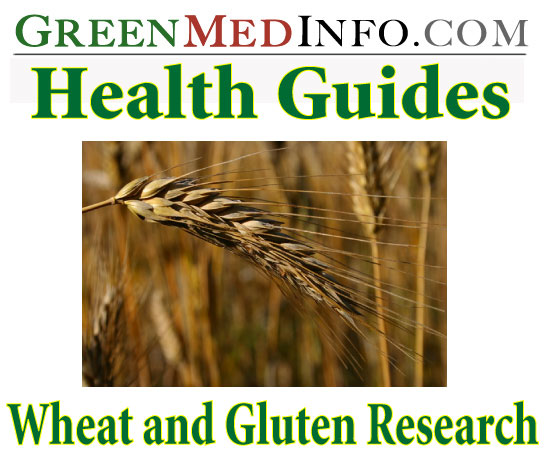 Despite popular opinion wheat consumption may not be beneficial to health. These two published articles make a strong argument against perceiving wheat intolerance as simply a matter of allergy/genetic intolerance in a minority subset of the human population, but rather as a species-specific intolerance, applicable to all.

Part 1: The Dark Side of Wheat: New Perspectives on Celiac Disease & Wheat Intolerance

Reduction of toxic gliadin content of wholegrain bread by the enzyme caricain.

Wheat: 200 Clinically Confirmed Reasons Not To Eat It
Written by Sayer Ji, Founder
Whereas conventional screenings for wheat allergies or celiac disease consider intolerance exceedingly rare, an accumulating body of clinical research now links wheat consumption with over 200 health problems. Could this be why millions of American consumers are now expressing their wholesale rejection of this "king of grains"?

Rice, Potato, and Tomato May be as Inflammatory as Wheat
Written by Sayer Ji, Founder
In this article a key question is brought to the forefront, namely, is eating wheat and gluten free enough to obtain optimal health? The mass market has done quite a good job of accommodating the gluten & wheat free movement by providing an increasingly wide number of good tasting and relatively nutritious "whole grain" products. But are whole grains like rice, or other substitute flours like potato, really good for us?

Wheat Gluten Newly Confirmed To Promote Weight Gain
Written by Sayer Ji, Founder
Wheat's weight-promoting effects are newly confirmed. Used to add weight to cattle before slaughter, wheat has been used to pack on the pounds in animal husbandry since the advent of the discipline. Why should we be surprised that it adds weight to humans who eat it as well?

Wheat Contains Not One, But 23K Potentially Harmful Proteins
Written by Sayer Ji, Founder
Despite popular misconceptions gluten is only the tip of a very large iceberg. There are actually 23,788 distinct proteins that have been identified in wheat, any one of which could incite a negative immune reaction in the body.

Do Hidden Opiates in Our Food Explain Food Addictions?
Written by Sayer Ji, Founder
Food addictions are not strictly “psychological” problems, but have a hard-wired, organic component. Many of the most commonly consumed foods in Western culture actually contain narcotic properties associated with the presence of psychoactive chemicals that bind to opioid receptors in the nervous system.

Why Gluten Is Bad For Everyone
Written by Dr. Rodney Ford
Here we present you with the evidence of the universal harm of gluten.

Wheat As A Common Cause of Dyspepsia and Irritable Bowel
Written by Sayer Ji, Founder
Could common complaints of bloating, abdominal tenderness and indigestion following a meal, and even the increasingly prevalent complaint lazily labeled 'irritable bowel syndrome' by conventional medicine, be worsened -- even caused -- by consuming wheat?

Wheat: A Missing Piece In the Autism Puzzle
Written by Sayer Ji, Founder
People often balk at the concept that a gluten-free diet may improve the condition of autistic children. For so many who have tried it, the proof is not in academic publications but in the (gluten free) pudding. Nothing is more compelling than seeing improvement with your own eyes, not even a randomized, double-blinded clinical trial.