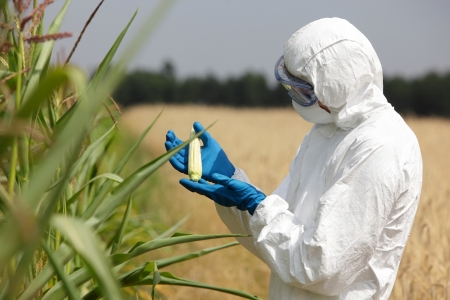 Hidden GMO Exposures: Is It Possible To Avoid Them?
Written by Eleni Roumeliotou
Systematically bypassing public awareness and approval, GMOs have invaded a much wider market than the food industry. Dubious industrial uses surpass even the wildest imagination and show that our daily lives are far more contaminated by GMOs that we thought.

The GMO Agenda Takes a Menacing Leap Forward with EPA’s Silent Approval of Monsanto/Dow’s RNAi Corn
Written by Sayer Ji, Founder
Without much more than a whisper from the mainstream media, Monsanto’s newest Frankenfood has received full EPA approval and will be arriving on dinner plates by the end of the decade.

The Poison Business: The Monsanto Papers Reveal Media, Science, and Regulatory Collusion
Written by Jefferey Jaxen
Major tectonic shifts have occurred around the historically secretive multinational corporate structure of Monsanto, forcing transparency, furthering the public debate, and assisting lawsuits that expose the true nature of Monsanto’s toxic product and its multi-level collusion to hide the fact of its carcinogenicity.

There is a Revolution in Genetics Afoot - And It Affects Everyone
Written by Sayer Ji, Founder
There's a revolution in genetics afoot, but it's not what most people think.

Monsanto's Worst Fear May Be Coming True
Written by Jonathan Latham, PhD
The tide is turning against the globalization of GMO-based agriculture and forced feeding with consumers leading the charge from the bottom up demanding informed consent (e.g. labeling, independent science) and organic alternatives.

ALERT: Certified Organic Food Grown in U.S. Found Contaminated with Glyphosate Herbicide
Written by Brian Shilhavy
Think you can avoid glyphosate by buying organic? Think again. A new investigation by Tropical Traditions reveals that many products in the organic grain market in the U.S. contain glyphosate residue at levels almost the same as conventional grains.

What is the Zika Virus Epidemic Covering Up?
Written by Jagannath Chatterjee
Correlation does not mean causation. Is the Zika virus being used as a scapegoat for Pharma's dangerous adverse effects?

Safety of Monsanto/Dow's Newly Approved Frankenfood (RNAi Corn) Called Into Question
Written by Sayer Ji, Founder
Another study confirms what activists and scientists alike have warned: the next generation of RNA interference GM foods may seriously compromise the genetic integrity of our species.