Views 128899
Posted on:
Thursday, October 25th 2012 at 7:45 am
Written By:
Heidi Stevenson
This article is copyrighted by GreenMedInfo LLC, 2020
Visit our Re-post guidelines 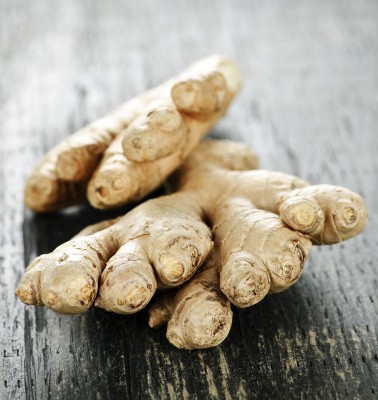 Not only is ginger a culinary marvel, its health benefits are stunning. It has been shown to be more effective against staph infections than antibiotics--and without the adverse effects.

Ginger's culinary qualities are a delight, but its health benefits are simply stunning. It has been shown to be more effective against bacterial staph infections than antibiotics. It can kill cancer cells. Its anti-inflammatory effects are already famous. It can resolve brain inflammations, and ease or cure a variety of gut problems, such as ulcerative colitis and acid reflux. And ginger can even alleviate the effects of gamma radiation. What's not to love about this incredible herb?

Standard in many kitchens and cuisines, ginger is the seasoning that gives life to a host of dishes. It's been used medicinally for more than 2,000 years. Though best known for its gastrointestinal soothing effects, that's just the beginning of its uses. The plant parts used for both culinary and medicinal purposes are the rhizomes, the root-like stems that grow underground. The primary plant used medicinally is Zingiber officinale.

Several compounds in ginger may be related to its health benefits, including shogaol, zingerone, and gingerols, which are similar to chili pepper's capsaicin, noted for its pain relieving ability. However, as we've seen with separating aspirin from willow bark, trying to find the active ingredient in a herb and using it alone tends to both diminish its effects and remove the balancing components that can both increase positive effects and decrease or eliminate adverse effects.

Some information in this article is derived from studies that have isolated single ingredients, generally with the goal of developing drugs. Though this may be accomplished, a history of pharmaceuticals demonstrates that it is both hubristic to believe that nature will be improved and naive to think that isolating a single chemical can possibly be done without removing the balancing elements that mitigate against harmful effects. Nonetheless, such studies do help demonstrate that there is strong medicine in ginger.

Let's take a look at some of the areas that ginger has been shown to benefit health:

Astounding, isn't it? The range and severity of conditions that ginger can help is stunning, and the degree of effectiveness is even more amazing. It's time for modern medicine to take a step back and ask itself how it got on such a wrong track. When drugs and treatments that are less effective and also full of adverse effects are used instead of first looking to a natural treatment like ginger, then surely a wrong turn has been taken.

Ginger is almost completely safe. It is possible, though exceedingly rare, to experience an allergic reaction associated with anaphylactic shock. Obviously, if that occurs, you should not attempt to take it again.

Ginger interacts with many drugs. In most cases, the effect is additive, not contradictory. You are told not to take ginger with these drugs--but frankly, one should ask why the doctor doesn't start with ginger and add the drugs if needed. Here are some of the drugs involved, according to Drugs.com(53):

Of course, if you take other herbs with ginger, be sure to check if they're blood thinners. If so, you may need to stop either the ginger or the other herb. At least, add one or the other slowly to assure that there are no adverse consequences.

In general, for personal use, there are two forms of ginger: extract and tea. Extracts may be purchased, of course, but be aware that there are two forms of extract, water and alcohol based. With many herbs, water based extracts are fine. However, alcohol based ginger extract has proven to be far superior over and over. Therefore, if you're planning to use ginger extract medicinally, you should take the alcohol-based variety.

Ginger tea is a treat for many of us. You can buy ginger teas in tea bags, but they're generally not as beneficial as making your own. It's not difficult. Just follow these instructions:

Peel about a cubic inch of ginger. You may either slice it thinly or grate it. Boil it in about 1½ cups of water for about 10 minutes. If you wish, you could add a bit of lime or lemon juice. If you want it sweetened, add some honey or stevia. Pour into a cup and enjoy!

Everyone's taste is different. This is a starting point. Use more or less ginger as suits you.

With a special thank you to GreenMedInfo - a wonderful resource!

(1) Histone deacetylase inhibitors from the rhizomes of Zingiber zerumbet.

(8) In vitro and in vivo modulation of testosterone mediated alterations in apoptosis related proteins by [6]-gingerol.

(13) Antibacterial activity of [10]-gingerol and [12]-gingerol isolated from ginger rhizome against periodontal bacteria.

(16) The anti-ulcer effect in rats of ginger constituents.

(19) Effect of ethanolic extract of Zingiber officinale on dyslipidaemia in diabetic rats.

(27) Pharmacological basis for the medicinal use of ginger in gastrointestinal disorders.

(34) Screening of microfilaricidal effects of plant extracts against Dirofilaria immitis

(36) Comparison of effects of ginger, mefenamic acid, and ibuprofen on pain in women with primary dysmenorrhea.

(41) Evaluation of the effect of hydroalcoholic extract of Zingiber officinale rhizomes in rat collagen-induced arthritis.

(42) Ginger root against seasickness. A controlled trial on the open sea.

(44) Ginger syrup as an antiemetic in early pregnancy.

(45) Protein and ginger for the treatment of chemotherapy-induced delayed nausea.

(49) Effectiveness of Saiko-Keishi-To (TJ-10, a Kampo herbal medicine) for trigeminal neuralgia in rats

(50) The effect of ginger extract on blood urea nitrogen and creatinine in mice.

Health News: Ginger could cut ulcer risk, a new vaccine could protect against MRSA and could a dose of zinc silence tinnitus?