Infant formula consumption may be associated with an increased risk of developing at least some detectable level of enamel fluorosis.Jan 01, 2009

These findings do not support current guidelines that recommend the use of hydrolysed formula to prevent allergic disease in high risk infants.Dec 31, 2015

"Formula feeding is associated with increased hospital admissions due to infections among infants younger than 6 months in Manila, Philippines."Feb 01, 2010

ADHD was more common among formula-fed infants in the 2007 possibly by early exposure to BPA.Jul 13, 2017

Beastfeeding has a preventive effect against asthma, ear infection and allergic diseases.Dec 01, 2007

Breastfeeding has a protective effect on diarrhea among children.Nov 01, 2009

Candida occurence in oral cavities is more prevalent in formula fed infants than breastfed ones. Apr 01, 2003

Enterobacter sakazakii infection and meningitis has been associated with the use of powdered infant formulaDec 01, 2010

For both diarrhoea and lower respiratory tract infection (LRTI), the monthly risk of hospitalisation was significantly lower in those receiving breast milk compared with those receiving formula.Feb 01, 2009

Formula feeding increases the risk of antibiotic prescriptions in children up to 2 years.Sep 05, 2019

Formula-fed infants have a higher risk of childhood cancer. May 01, 1993

Formula-fed infants may have stunted synaptogenesis and slower neurodevelopment. Nov 01, 2003

Formula-feeding was associated with a higher risk of infant mortality than breastfeeding in a population of HIV-1 positive mothers.Jan 01, 2008

Girls fed soy formula had altered DNA methylation in vaginal cell DNA which may be associated with decreased expression of an estrogen-responsive gene.Dec 31, 2016

Infant feeding with soy formula milk has a disruptive effect on the testes of monkeys. Apr 01, 2006

Infant formula is associated with increased risk for obesity later in life. Jan 01, 2009

Infant formula is associated with microvascular dysfunction relative to breastfeeding. May 01, 2009

Infant formula may contribute to outbreaks of Salmonella in infants. Feb 01, 2007

Infant formula may have inadequate iodine levels contributing to a high risk of iodine deficiency, especially in premature babies.Nov 01, 1994

Infant formula use is associated with an increased risk for necrotising entercolitis in preterm and low birth weight infants. Jan 01, 2007

Infant formula use is associated with increased morbidity and mortality in Botswana. Jan 01, 2010

Infants fully formula-fed on formulae prepared with optimally fluoridated water (0.7-1.0 mg/L) have a high probability of exceeding the upper limit for fluoride and are at increased risk of dental fluorosis.Jun 02, 2010

Infants with congenital hypothyroidism may do well to avoid soy-based formula. Jun 01, 1997

Necrotising enterocolitis during the first week of life can be prevented through exclusive breastfeeding. Aug 01, 2008

Pasteurization of mother's own milk reduces fat absorption and growth in preterm infants.Sep 30, 2007

Powdered infant formula may be a source of Salmonella infection in infants.Jan 15, 2008

Soy formula could lead to changes in reproductive tissues.Feb 28, 2018

The use of hydrolyzed formula may be associated with enterocolitis syndrome in infants. Dec 01, 2007

The use of infant formula is associated with throat colonization of Haemophilus influenzae. Jun 01, 1999

This study observed a protective effect of breastfeeding on the development of Kawasaki disease in the Japanese population. May 31, 2016

Allergic colitis caused by cow's milk (casein) presenting within the first hours of premature life has been reported.Oct 01, 2005

"Infant formula ingestion is associated with the development of diabetes in the BB/Wor rat."Dec 31, 1999

A single aspiration of infant formula into the lungs leads to an acute inflammatory response involving both lung macrophages and epithelial cells.Sep 01, 2011

Infant formula is susceptible to contamination with a pathogenic bacteria.Nov 01, 2009

There is increased migration levels of bisphenol A from polycarbonate baby bottles after dishwashing, boiling and brushing.Jul 01, 2003

All of the 30 infant formulas tested were contaminated with aluminium.Oct 07, 2013

Aluminum exposure and toxicity in neonates.Apr 30, 2014

Aluminum ingestion is absorbed and may accumulate in different organs in both adults and infants.Oct 01, 1991

Compared to breastfed infants, formula-fed infants had lower bacterial diversity and an altered intestinal microbiota in the first few weeks of life.Dec 31, 2016

Currently, suboptimal breastfeeding is associated with over a million deaths each year and 10% of the global disease burden in children. Jun 01, 2012

Infant formual may contain the bacteria Enterobacter sakazakii which has been associated with cases of meningitis, necrotizing enterocolitis and sepsis in premature and full-term infants.May 01, 2008

Infant formula is commonly contaminated with the toxic substances Bisphenol A. Dec 15, 2010

Infant formula is susceptible to contamination/adulteration with toxic substances such as melamime.Dec 01, 2009

Infant formula sold in East Africa has been found to have up to twice the toxic dose of melamine according to FDA standards.Sep 01, 2010

Lead and cadmium contamination in a large sample of United States infant formulas and baby foods.Feb 14, 2019

Occurrence of glyphosate and AMPA residues in soy-based infant formula sold in Brazil.Dec 20, 2017

Polycarbonate bottles may leach 2-butoxyethyl acetate which is converted into 2-butoxyethanol.Dec 01, 2003

Some cow milk based infant formula has high levels of the hormone leptin.Sep 01, 2002

The benefits of breastfeeding and associated risks of replacement with baby formulas.Jan 31, 2017

The replacement of breastmilk by infant formula in HIV-infected mothers may have deleterius effects on the developing infant. Mar 01, 2008

The structure of infant formulas impacts their disintegration with the minimally-processed emulsions been lipolyzed and proteolyzed slower than processed formulas.Aug 31, 2015

The use of infant formula eliminates HIV transmission but incurs risk of increased mortality. Jun 01, 2002 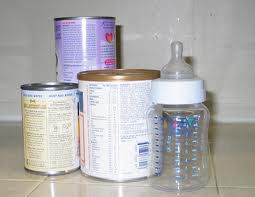 Formula for Disaster: The Clinically Confirmed Dangers of Breastmilk 'Alternatives'
Written by Sayer Ji, Founder
Infant formula has been linked to over 70 adverse health effects, so why are the vast majority of Americans still using it during the first year of their infant's lives?

Why Is Pesticide Used As An Ingredient In Infant Formula?
Written by Sayer Ji, Founder
Why is cupric sulfate - a known herbicide, fungicide and pesticide - being used in infant formula? And why is it displayed proudly on product labels as a presumably nutritious ingredient? Used to kill fungus, aquatic plants and roots of plants, parasitic infections in aquarium fish and snails, as well as algae and bacteria such as Escherichia coli, cupric sulfate hardly sounds fit for human consumption, much less for infants. Indeed, infants are all too often looked at as...

What Is This Petrochemical "Vitamin" Doing In Infant Brains?
Written by Sayer Ji, Founder
Concerning research reveals that the infant brain is capable of absorbing and accumulating synthetic vitamin E. This petrochemical derivative may have significant downstream adverse effects on gene expression, immune function, and even neurodevelopment.

USDA Organic Infant Formula Contains Pesticide Labeled As A "Nutrient"
Written by Sayer Ji, Founder
The USDA organic label is supposed to protect the consumer against being exposed to harmful chemicals and GMOs, but the sobering fact is that USDA-certified infant formula products are not only being allowed to use a pesticide in their formulas, but are advertising it as a 'healthy' mineral to unsuspecting consumers.

Pressure Applied on the US Codex Office Regarding GMO-Contaminated Infant Formula
Written by Katherine Carroll, NTP
Why is Codex fortifying infant formula, follow-up formula, cereals and NRVs for infants and children with GMO-contaminated ingredients?

Chemicals As "Nutrients" In "USDA Organic" Infant Formula
Written by Sayer Ji, Founder
Advertised as "produced without potentially harmful pesticides," this "Organic" Infant Formula actually contains chemicals used as pesticides and which it lists on its label as a "nutritional" ingredient. And this is just the tip of the toxicological iceberg -- a case of "organic-washing" at its worst!